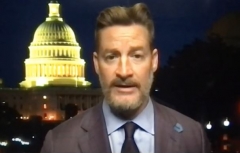 Democrats are introducing a bill to expand the Supreme Court by adding four new justices because they know their policies are unconstitutional, Rep. Greg Steube (R-Fla.) said Wednesday.

“They know that the only way that they can pass their unconstitutional agenda is to add more people,” Rep. Steube said in an interview with Fox & Friends First:

“Well, they’re going to announce that they’re going to file a bill that’s going to add four new justices to the U.S. Supreme Court, because they know that the only way that they can pass their unconstitutional agenda is to add more people to the court to vote in the direction that they want them to vote.”

“They know the only thing stopping them right now on all of these far-left policies, progressive policies, is the U.S. Supreme Court:

“The things that the Biden Administration wants to do, though executive orders, on guns.

“The things that they’ve already done on illegal immigration.

“The things that they’re trying to get through the House – like H.R. 1, that clearly violates Article 1, Section 4 of the U.S. Constitution

“They know that their one stopping point to getting all of this stuff done is the U.S. Supreme Court.”

“So, they’re going to change the rules and change the game and add four more people,” Rep. Steube said.