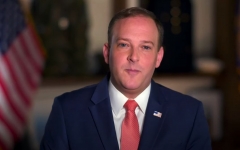 A bill introduced in the New York State Assembly would rob citizens of rights they’re not willing to give up, Rep. Lee Zeldin (R-NY) said Sunday in a statement condemning the proposed law.

Assembly Bill A416, introduced by Democrat New York State Assemblyman N. Nick Perry would give Gov. Andrew Cuomo (D) the authority to remove or detain someone deemed a threat to the public health amid concerns over the coronavirus pandemic – even if they are symptom-free – the Christian Broadcast Network (CBN) reports:

“A bill introduced by a New York State Assemblyman would give Gov. Andrew Cuomo (D) the authority to remove or detain someone deemed a threat to the public health amid concerns over the coronavirus pandemic.

“Assembly Bill A416 states that a questionable individual or group of people ‘shall be detained in a medical facility or other appropriate facility or premises designated by the governor.’

“Even those without an illness can be confined if they had ‘contact’ with someone who might have been sick, despite the fact that they were symptom-free.”

The bill is a “direct assault on our Constitutional guarantee of due process,” Rep. Zeldin said in his statement, warning that the bill “would grant officials, such as Governor Andrew Cuomo and state health officials, the authority to remove and detain individuals who they deem a threat to public health, detain them for up to 3 business days without a court hearing and require ‘an appropriate course of treatment, preventative medication or vaccination.’”

“This bill seeks to strip freedoms and liberties that we are not willing to give up,” Zeldin said. “This shocking legislation is not only greatly disturbing at face value, but a direct assault on our Constitutional guarantee of due process.”

“Neither Governor Cuomo nor any government official should be the judge and jury with a power like this, especially unilaterally and without question,” Zeldin said.

The Assembly is expected to take up the measure on Wednesday.