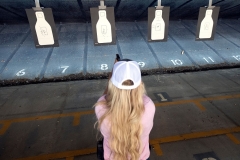 "April marked 13 months of elevated firearm sales which have ranged between 1.5 million and 2 million each month. Firearm sales spiked in March 2020 and have remained at unprecedented levels since. It’s a remarkable feat of firearm manufacturers to keep pace with this blistering demand," NSSF Public Affairs Director Mark Oliva said in a statement.

Safety concerns and fear that the Biden Administration will outlaw Americans’ ability to own guns are driving the sales surge, Oliva said:

“Americans are buying firearms for concerns for personal safety and for White House and Congressional efforts to limit and deny the ability to purchase certain firearms. The continued gun control statements by President Biden, many of which have been fact-checked and debunked as false, are driving sales.”

Sales have been fueled by first-time gun buyers who have realized that, today, they “are their own first responder,” Oliva said:

“When protests turned into riots last year, following the death of George Floyd, some Americans realized they are their own first responder. Having the CHOP zone, where law enforcement, fire departments, and medics were shut out, reaffirmed that need.”