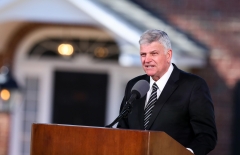 “Congratulations Coach Reich and the @Colts! Thank you for not being ashamed to take a stand for Jesus Christ and for being an example for other Christians to follow!” Reverend Franklin Graham said Tuesday.

In trio of tweets, Rev. Graham cheered the courage of Indianapolis Colts’ Coach Frank Reich, who gave credit to Jesus and quoted a Christian song after his team’s upset win over the Buffalo Bills on Sunday.

Rev. Graham then quoted Coach Reich, who had cited a Christian song while addressing reporters after the game:

“At the press conference he quoted from the song, ‘In Christ Alone.’ He said, ‘In Christ alone I place my trust, & I find my glory in the power of the cross. In every victory, let it be said of me that my source of strength & my source of hope is Christ alone.’ #Truth”

Rev. Graham followed up by declaring the Colts “incredibly blessed” to have a coach like Reich, who gives glory to God for his success:

“The Indianapolis @Colts are incredibly blessed to have a man like this as head coach. After their upset victory on Sunday over the @BuffaloBills, Coach Frank Reich didn’t hesitate to recognize the One who helped him and the team get to that point.”

In that tweet, Rev. Graham links to an article by  The Western Journal reporting on Reich explaining his reference to the song:

“‘The song is ‘In Christ Alone,’ and it’s written by Shawn Craig. … It might encourage someone who’s climbing their own mountain right now’

Reich went on to recite the lyrics of the chorus, which read, ‘In Christ alone I place my trust, and I find my glory in the power of the cross. In every victory, let it be said of me that my source of strength and my source of hope is Christ alone.’

“He said his personal favorite line came from the song’s second verse and says, “I seek no greater honor than just to know him more.’”

Reich said that he quoted that same verse 30 years earlier, after he quarterbacked the Buffalo Bills to the largest come-from-behind win in NFL history.

After leaving the NFL, Reich briefly served as a pastor before eventually returning to the league as a coach.