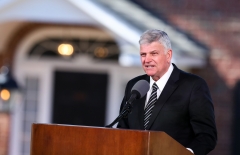 “This is very frightening — and we’re really going to turn into what we saw in communist countries,” Rev. Franklin Graham warned Thursday, commenting on the threat of both a massive, armed IRS and the way politicians, with the support of the American public, are “celebrating sin.”

“We, as a nation, are in trouble – and we’re getting, probably, what we deserve – because we’ve turned our back on God,” Rev. Graham said in a Newsmax interview with Host Eric Bolling:

“It’s very, very frightening. So, I’m concerned Eric, and the only hope for this nation is God.

“And we, as a nation, we’ve turned our back on God. We have just left Him behind, basically. We support abortion, same-sex marriage – these are things that are against God’s standards and God’s laws.

“I’m afraid. I think many Americans are. But, again, we need God’s help,” Rev. Graham said.

Graham said he’s also frightened by the dangers of Democrats’ “Inflation Reduction Act,” which more than doubles the size of the IRS:

“They will use the IRS to go after people that don’t support their agenda.

“And I think you see when they’re going to be armed and things like this. This is very frightening — and we’re really going to turn into what we saw in communist countries.”