Scalise: ‘If Anybody's Going to Be Sued for Gouging, It Should Be the Gouger-in-Chief,’ Who Caused Record Gas Prices 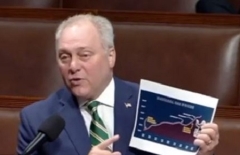 “And here we are, it's another week and another bill to try to divert attention away from what Joe Biden, himself, did to raise gas prices to the point where families can't even afford to drive to work. Can't even afford to go to the grocery to pay 15, 20 percent more for goods, because of Biden's inflation.”

“But, let's start from the beginning. Let me read you a quote from candidate Joe Biden. Quote, 'No more drilling on federal lands. No more drilling, including offshore. No ability for the oil industry to continue to drill. Period. Ends.'

“That was Joe Biden, the candidate. Unfortunately, Day One he started doing just that: an assault on American energy. And what's been the result: dramatically higher gas prices.”

“He's not against all pipelines. He greenlighted Russia's pipeline, let them sell their oil to Europe, canceled ours.”

Scalise went on to explain how Pres. Biden has refused to allow, and even canceled, the sale of oil and gas leases, which has resulted in higher energy prices.

“In fact, if anybody's going to be sued for gouging, it should be the Gouger-in-Chief, Joe Biden, who has created this problem,” Scalise said.

What’s more, while the Democrats’ price-gouging bill allows others to be sued for the high cost of gas, it doesn’t allow suits against Biden, who is actually responsible, Scalise noted:

“But, this bill doesn't allow him to be sued. You can sue other people in this bill and you can sue your local gas station, if you don't like the high price of gas, but you can't sue the person who actually did these things that have increased the price of gasoline: Joe Biden.”

“We ought to bring up bills that actually fix the problem,” Scalise concluded.