Schumer: ‘Texas Is Paying the Price’ for Ignoring Climate Change, ‘I Hope They Learned a Lesson’ 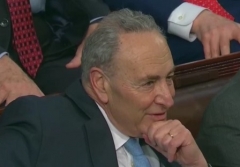 Sen. Chuck Schumer (D-N.Y.) is blaming last week’s Texas power outage on the state’s failure to address climate change - not on the so-called climate-friendly wind farms that froze up.

Now, “Texas is paying the price” and should learn a lesson from ignoring climate change, Schumer said Sunday, The New York Post reports:

“The bottom line is, Texas thought it could go it alone and built a system that ignored climate change,” Schumer said during a Lower East Side press conference, referring to the state’s decision to stay off the country’s national power grid.

“It was not what’s called resilient, and now Texas is paying the price,” Schumer said.

“I hope they learned a lesson,” he added.

An investigation should be launched to determine how Republican Texas Governor Greg Abbott is responsible for last week’s “winter storm crisis,” Schumer tweeted on Sunday:

“Governor Abbott thought Texas could run an electrical grid that ignored the climate crisis. It was not resilient. The federal investigation by @FERC and @NERC_Official must look into how Governor Abbott's policies in Texas have failed and exacerbated the winter storm crisis.”