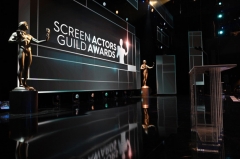 Combined, the two networks pulled in an average of 957,000 viewers, less than half the previous year’s audience, Variety reports:

“SAG Awards slumped to their smallest audience in at least a decade. Last year’s telecast, which aired on Sunday, Jan. 19, 2020, averaged 2 million viewers and a 0.44 rating with adults 18-49 on both TBS and TNT.”

“A pretaped and condensed-to-one-hour version of the 2021 Screen Actors Guild Awards settled for 957,000 total viewers across TNT and TBS, according to Nielsen, a new all-time low for the annual special.

“Last year’s show had 2 million total viewers on the Turner cable channels. That was the previous record low, and was down from 2.7 million viewers in 2019.”

Audiences for politically-charged entertainment awards show broadcasts have been falling across the board. Last month, the Golden Globes audience posted a record low. The Country Music Awards, American Music Awards, and the Primetime Emmy Awards have also suffered steep declines in recent months. Last year’s Academy Awards show had, by far, its smallest audience ever. This year’s broadcast of the Oscars has been postponed to April 25.