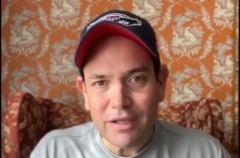 Democrat leaders are ignoring the country’s real problems in order to focus on the pet issues of a small group of radicals, Rubio says in a new video commentary:

“They’re focused on the ideas coming from these staffers that walk around, you know, with the fancy Swedish backpacks and have the laptops with the Bernie Sanders stickers on them – as if, somehow, that reflects the views of the broader country. That’s what they’re focused on.

“Look, it’s one thing when your leaders disagree on how to solve problem. But, what we have is something else. What we have are leaders who are ignoring the real problems and focused on fake problems that happen to be the pet issues of a small group of people.”

For the past three weeks, Congress has been consumed with Democrats’ fake voting rights crisis – an issue that doesn’t concern most Americans, because it’s never been easier to vote, Sen. Rubio says:

But, Democrats are devoting their attention and efforts to fake concerns, because they’re catering to a radical political base that despises America and plays the race card against anyone who gets in their way, Rubio says:

“They’re using the hateful language of these radicals who say that America is inherently evil and anyone who disagrees with them is a racist.”