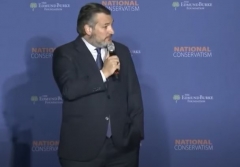 The potential grounds for a Biden impeachment?

Don't miss episode 105 of #Verdict, out now on YouTube!https://t.co/pM7J5vQJeh pic.twitter.com/mo4merBwDL

“Official malfeasance and nonfeasance and, in some cases, misfeasance may be the subject of impeachment. That’s an argument. It’s an argument that the Democrats, when they were going after Trump, could rely on,” Cruz says, quoting a former Supreme Court justice.

“In the case of the border, it’s nonfeasance: it’s utterly refusing to follow the law. So, that’s one ground,” Cruz explains.

“But, there are at least two other grounds, and there are probably more,” Cruz says, citing “the utter and colossal disaster of the Afghanistan withdrawal” and “the president’s lawless vaccine mandates.”

Impeaching and convicting Biden for his vaccine mandates would require proving that the president willfully and knowingly acted in open defiance of the law, even though he had been advised that his actions were lawless, Cruz says:

“None of those, at the end of the day, may be a slam-dunk” because the charges would have to be proven – but, impeachment wouldn’t even be a consideration if Democrats hadn’t set the precedent by impeaching President Donald Trump solely for political and policy purposes, Cruz notes:

“And, if the Democrats had not gone down the road of impeaching Trump – twice – for political and policy disagreements, then you probably would not see a Republican House respond using the same means, but one they started this process…

“We predicted at the outset that this was going to be a slippery slope.”