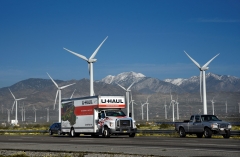 So many people rented one-way trucks to move out of California in 2021 that U-Haul outlets in the state ran out of inventory for most of the year, the nation’s largest renter of do-it-yourself trucks reports.

“California remained the top state for out-migration,” U-Haul says in a news release announcing the latest findings of its annual U-Haul Growth Index, which ranks states based on “the net gain of one-way U-Haul trucks entering a state versus leaving that state in a calendar year.” U-Hauls migration trends data are compiled from more than two million annual one-way U-Haul truck customer transactions.

California’s net out-migration of rental trucks permanently leaving the state would have been even more severe – but, the state’s rental locations ran out of one-way truck inventory and, for much of the year, remained without trucks to rent to people fleeing the Golden State to live elsewhere.

“U-Haul simply ran out of inventory to meet customer demand for outbound equipment,” the company reports. However, since U-Haul locations dedicate a portion of their inventories to “in-town” rentals, vehicles for round-trip customers remained in stock and available throughout the year.

According to the UHaul.com website, it currently costs about three thousand dollars more to rent a two-bedroom/three-apartment 20-foot truck moving from San Francisco, California to Austin, Texas than it does to rent one relocating from Austin to San Francisco.

“While U-Haul migration trends do not correlate directly to population or economic growth, the U-Haul Growth Index is an effective gauge of how well cities are both attracting and maintaining residents,” the company notes.

See full ranking of states according to the U-Haul Growth Index.