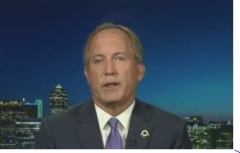 In order to counter the false narrative promoted by Democrats through the media, Republicans need to “keep talking about the truth, which is there is real voter fraud,” AG Paxton said Monday in an interview with Fox & Friends First Host Todd Piro.

“We have more voter fraud cases that we have ever had. That’s just a fact,” Paxton said, noting that his office has more than 500 voter fraud cases waiting to go to trial and over 300 investigations currently underway. The election-reform legislation that Democrats are blocking is crucial to ensuring that citizens have confidence that election results are accurate and true, Paxton said.

Asked if requiring identification to vote is racist, Paxton replied, “Absolutely not.” “Everybody is going to be required to have it, so it can't be discriminatory,” the attorney general said, adding that it’s common practice to require I.D. for many other activities, such as boarding an airplane or staying at a hotel.

“When we passed it in Texas, voting was not suppressed, it went up, because people had confidence in the elections,” Paxton said.

Todd Piro: “You think of all these voting bills, especially the one that Democrats stopped in its tracks.  Hopefully, according to the Republicans, you will be getting it back. Let's focus though on the messaging, because I don't think, come 2022, it's going to matter what the voting rules are. I think it's going to be about the messaging.

“Who is winning the messaging on voting rights laws?”

AG Paxton: “Look, it's up grabs. Certainly the media has been harsh to Republican efforts to reform some of the election issues that we saw in our last election. But I think if we keep talking about the truth, which is there is real voter fraud. In my office we have over 500 cases waiting to go trial. We have other investigations, over 300.

“We have more voter fraud cases than we have ever had. That's just a fact.

“And so, we need to talk about the fact that we are dealing with this issue and that we do need legislation to make sure that voter fraud is not prevalent so people can count on the elections being true and that the right people are being elected.”

“And we all know that photo I.D. is being used everywhere, whether we’re getting on an airplane, going to a hotel, whether you’re going into a courtroom. It's a very common practice, it is not unusual. And, by the way, when we passed it in Texas, voting was not suppressed, it went up because people had confidence in the elections.”