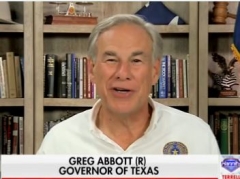 Outlining his new efforts in an interview with Fox News, Gov. Abbott said that, while the vice president and president “continue to twiddle their thumbs and do absolutely nothing,” Texas is taking steps to do their job for them:

“So, while she and Joe Biden continue to twiddle their thumbs and do absolutely nothing, to even solve this catastrophe that took place just this week, it was me and Texas on the ground, on the border today, where I was announcing initiatives about what Texas is going to do to try to do Biden’s job of making sure that we’re going to do a better job as a country to prevent truckers from transporting and smuggling migrants.”

The truck carrying the doomed migrants had not been inspected by the U.S. Border Patrol when it passed through a border checkpoint, because of a lack of resources, Gov. Abbott says.

“It’s Texas and the Texas Department of Public Safety that are setting up checkpoints, so that we can check and make sure that smugglers are not smuggling these people into America in trucks like this.”

In addition to the new checkpoints, Texas is also deploying strike teams and adding more miles of wired fencing, as part of Gov. Abbott’s new initiatives.