Texas Sen. Cruz: Dems Who Fled the State Over Voter Verification Bill Had to Show I.D. to Board Their Private Jet 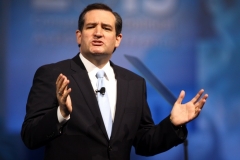 Texas legislators who fled the state, in order to prevent the quorum Republicans need to pass legislation to ensure that people who try to vote are eligible to do so, almost certainly had to show identification in order to board their private jet, Sen. Ted Cruz (R-Texas) said Tuesday.

In an interview on Fox & Friends, Cruz noted the irony of Democrats having to verify their identities in order to thwart legislation that would require prospective voters to verify that they’re legally eligible to vote:

“I think it’s going to end with the Texas legislature taking up and passing election integrity legislation. What you’re seeing the Democrats do here is a political stunt.

“It’s ironic that, as they were getting on their private jet to fly to Washington, D.C., they almost surely had to show identification to get on that jet.

Sen. Cruz said Democrats need to get back to work. “And, one way or another they will,” Cruz added, noting that the Texas speaker of the House has the authority to arrest fleeing House members:

“Under the Texas constitution, there’s a provision that explicitly gives the Speaker to arrest fleeing House members – that provision is copied, word for word, from the U.S. Constitution. And, so, this stunt is going to fail. They’re going to come back, there’s going to be a quorum, and I believe the legislature is going to do its job and protect the integrity of elections.

UPDATE: The quorum-deprived Texas House voted 76-4 on Tuesday to call for the Sergeant at Arms to take steps to bring back unexcused House members, according to a tweet by CBS Political Reporter Adam Brewster. Meanwhile, the Texas Senate has the quorum required to conduct business.