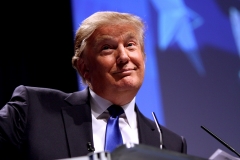 “And, it’s unbelievable, what’s happening. This is far more than Bernie Sanders ever thought was possible.

“And, it’s disgraceful. And, they’re trying to destroy our country.”

“When he campaigned, he never talked about closing the Keystone. I wouldn’t say that he said he was going to keep it, but he certainly didn’t indicate that he was going to, in his almost first week, immediately get rid of it.”

“He never said that during the campaign. On energy, he was pretty positive on energy. And, now, we’re not going to be energy independent in another few months, based on what he’s doing. Gas prices are going through the roof. He never talked about this stuff, he never said.