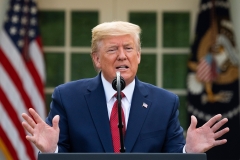 In a press conference Thursday discussing his executive order to combat censorship of conservative voices by Twitter, President Donald Trump was asked why he doesn’t just delete his Twitter account, if he has so many concerns about it.

“If you weren’t fake news…I would do that in a heartbeat,” Trump responded:

Reporter: “Mr. President, given your concern with Twitter, have you given any consideration to deleting your account and just walking away from this platform you've been so critical of?”

Trump: “Well, you know, if you weren't fake, I would not even think about it: I would do that in a heartbeat.”

“I'm real, sir,” the reporter protested, prompting the president to explain that, without Twitter, he wouldn’t be able to correct the record about all the false claims the media report about him:

Pres. Trump: “But, the news is fake. If you look at what gets printed in newspapers - if only the public could understand where, you know, they are reading a story and they think it is real, and it’s not real in so many cases. I'm not saying in every case. You have some great journalists. You have journalists I have a great respect for. But largely, I find, at least in a political sense, there is so much fake news, it is disgraceful.”

“If we had a fair press in this country,” Trump said, he would delete his Twitter account “in a heartbeat.” In fact, Trump added, “There is nothing I would rather do than get rid of my whole Twitter account,” the president added. But, given the enormous reach his social media accounts give him, he can’t afford to abandon them, because he needs to refute all the fake news about him being promoted by the media, Trump said:

“I would do that in a heartbeat - if we had a fair press in this country, I would do that in a heartbeat. There is nothing I would rather do than get rid of my whole Twitter account. But, I'm able to get to, I guess 186 million people, when you add up all the different accounts and add Facebook and Instagram. “That’s a lot of people and that is more than the media companies have, frankly, by a lot.

“And so, if I get a story that's wrong, I can put a social media, I don't usually use the word ‘Twitter,’ I say ‘social media,’ but I put something out and the next day or the next hour or the next minute, everybody is reading about it. So, I'm able to refute fake news. That is very important.”