Tucker Carlson Presents a Look Back at Pelosi's ‘Greatest Hits’ 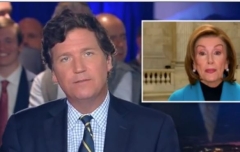 After House Speaker Nancy Pelosi (D-Calif.) announced Thursday that she will not seek a leadership role in the Democrat Party next session, Fox News Host Tucker Carlson presented a video “tribute” to Pelosi.

“We could’ve gone hours, we have that much tape, but we got it down to just a few moments. Here are just a few of her greatest hits,” the “Tucker Carlson Tonight” host said.

What followed was a montage of Pelosi:

Because Republicans won the House majority in this month’s midterm elections, they will be electing the next House speaker. As a result, on Thursday, Pelosi announced in a speech that she will be stepping down and turning party leadership over to a new generation of Democrats.