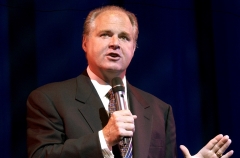 On Sunday, Limbaugh (@RealRLimbaugh) tweeted to CEO Dorsey (@Jack) in a post telling his followers that his name was feeling “lonely” without the checkmark:

“My name is feeling awfully lonely without the blue checkmark. Hint hint Twitter. I know you are busy with the election...but how about throwing America’s Real Anchorman a checkmark. @jack”

“I’m not a big social media guy, Limbaugh admitted while touting his new Twitter handle on his October 12, 2020 program. “However, we have three weeks left in this game…and we’re gonna leave everything on the field” by Election Day, Trump said, detailing the content of his posts:

“We just got started here with Twitter, and I want to give you the new handle. I’m gonna tell you what we’re gonna do with it. We’re firing up a new Twitter account to be able to tweet out the brilliant utterances that occur on this program in a moment’s notice. Video clips, for example.

“Something I say on this program that can be video-clipped in a minute, minute and a half, whatever, or longer, we want to be able to jam it back out rather than have it part of a massive 30-minute monologue and transcript. It’s just a matter of focusing on things that we think are poignant and meaningful. Now, the new handle is @RealRLimbaugh.”

On last Friday’s show, Limbaugh told listeners that he is now “the number-one Twitter follower listed on the president’s page:

“We had a couple of tweets up there during the debate last night, “Winning, winning, winning!” and (White House Press Secretary) Kayleigh McEnany retweeted that. We are the number-one Twitter follower listed on the president’s Twitter page. So, yeah, it’s @RealRLimbaugh. We’ve mastered it in less than two weeks here, folks, and nobody ought to be surprised at that.”

The only person Limbaugh follows is President Donald Trump (@RealDonaldTrump), according to @RealRLimbaugh.

Still, Limbaugh said that he is engaging with the public on Twitter out of necessity – not because Twitter represents all Americans.