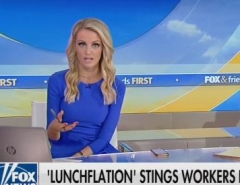 “You can't escape this inflation, because it is driven by things like energy prices, which flow into everything,” Business and Economics Professor Brian Brenberg at King’s College said Wednesday, when asked about “lunchflation.”

In a Fox and Friends First interview, Brenberg was asked by Host Carley Shimkus about “lunchflation” - the rapidly rising cost of lunch for people returning to work as the COVID pandemic winds down:

“This should come as surprise to nobody: restaurant menus, overall, are hitting record prices and now people are calling it ‘lunchflation,’ because salads are up 11%, wraps are up 18%, all the things that you would get when you are at work for lunch. So, a lot of people will be brown-bagging it. The only problem with that is that grocery store prices are high.“

President Joe Biden wants Americans to simply accept the cost increases, but they don’t have to – and shouldn’t – because the surging inflation is the result of Biden’s political policies, Brenberg explained:

“You can't escape this inflation, because it is driven by things like energy prices, which flow into everything. The guy with the chainsaw cutting down the tree, the guy making the salad in midtown, wherever you are in America, this is going to hit you.

“The president wants Americans to just start coping with this and feel like this is okay, this is normal, we can live with this. We don't have to cope with this.

“This is a political policy mistake the administration has made and there’s no way we should start adjusting to that and giving into the problem. People need to start pushing back and a lot are doing that by saying Mr. President, get it together, especially on energy right now.”

“The risk right now isn’t just inflation keeps going up, it is spending starts to reduce, you get stagnation in the economy. That is when it really hurts, when there’s no growth, when businesses aren’t hiring as much, when wages are not going up, that is the problem we’re going to have in this country very soon.”

There are three keys to getting the country back on track, Brenberg concluded:

“Solve crime in the big cities, let people get back to life, make smart choices and we’ll get through this.”