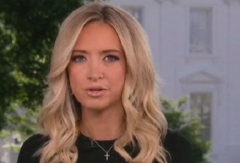 “I field hundreds of questions a day. Journalists are not above being questioned themselves,” White House Press Sec. Kayleigh McEnany said Tuesday, responding to harsh media criticism of her comments calling out media for badgering her about why churches should be allowed to reopen, but refusing to ask important questions about the mistreatment of former National Security Adviser Michael Flynn.

On Tuesday, Fox & Friends Host Brian Kilmeade asked McEnany if she was questioning the religious belief of the press on Friday when she expressed surprise that it appeared reporters did not want churches to be allowed to reopen.

“No,” McEnany replied, explaining that she merely found it peculiar that reporters would ask 11 questions in a row challenging the reopening of churches, but none about other businesses, like liquor stores, being deemed “essential”:

“No, I never questioned the religious beliefs of the press. Many of our journalists are great men and women of faith and differing faiths, whether it be the Jewish faith, the Christian faith, the Muslim faith.

“What I was saying was: I was asked 11 questions as to why churches would be allowed to reopen. It was a bit peculiar to be asked these 11 questions in a row and for the onus and the focus solely to be on why churches are essential. I’ve never been asked why a liquor store was essential, so I was merely pointing that out.”

And, when reporters refuse to ask other important questions – like those involving the illegal leaking of Flynn’s name and the discredited dossier used to investigate and spy on the Trump campaign – it’s fair game to question the press, McEnany said. In fact, the vast majority of reporters are practicing journalistic malpractice by not seeking answers to those questions, she added:

“And to the point about questioning the journalists and asking why they aren't asking certain questions:

“I field hundreds of questions a day. Journalists are not above being questioned themselves.

“Journalism is a great and noble profession, but there's been a dearth of journalists asking the real questions for President Obama, the criminal leak of Michael Flynn’s identity who leaked that identity the dossier used to launch a three-year investigation into this president and spy on his campaign.

“Why aren't those questions being asked? It's journalistic malpractice not to ask those questions and I can count on one hand the journalists who are, like Maria Bartiromo and Katherine Herridge, but where is the lack of curiosity from the current press?

“There is an extreme lack of curiosity at play.”

As MRC’s NewsBusters division reports, even Fox News Channel has aired a panel discussion condemning Friday’s comments to the press by McEnany:

Fox News Sunday anchor Chris Wallace invited a panel to bash White House Press Secretary Kayleigh McEnany because she dared to stand up to the opposition press. Between Wallace taking it personally and the Never-Trump editor-in-chief of The Dispatch, Jonah Goldberg attacking her, it was like watching CNN.

Wallace’s chief complaint was that McEnany had taken the White House pool to task for ignoring and downplaying the revelations in the corrupt investigation of Lt. Gen. Michael Flynn, and how the Russian collusion narrative was unraveling.

“I have to say that if Kayleigh McEnany had told Sam Donaldson and me what questions we should ask, that would not have gone well [for her],” Wallace bristled as he addressed Goldberg.