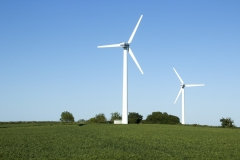 “Wait, these ‘green’ wind turbines use oil???” an astonished Swedish journalist asked, reporting that a wind turbine collapsed Saturday and people were being told to stay away -  because it was leaking oil.

“People are being warned to keep their distance because...it is now leaking oil everywhere!

In Sweden, a turbine at one of Europe’s largest and newest onshore wind farms collapsed on Saturday, RECHARGE News reports:

“A turbine fell at the 475MW Nysäter project in northern Sweden around midday on Saturday, said a statement on the project’s website.

“No one was injured but there was a suspected oil leak from the affected turbine’s gearbox and the entire wind farm is now closed, it added, urging the public to stay away.” 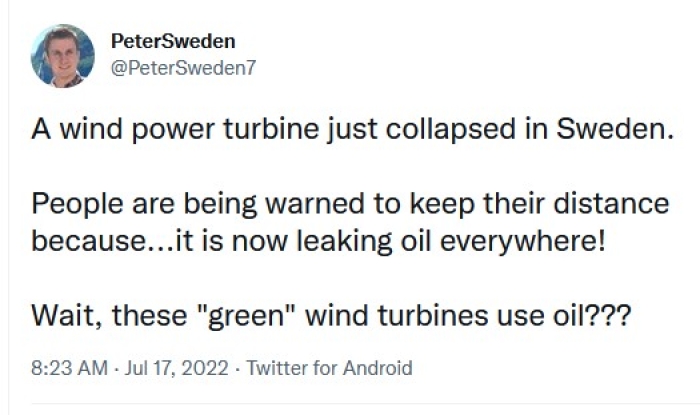 “Depending on its size, a wind turbine gearbox needs an oil quantity between 200 (53 gallons) and 800 L (211 gallons), according to a peer-review article published by MDPI, titled “Monitoring the Oil of Wind-Turbine Gearboxes: Main Degradation Indicators and Detection Methods.”

“Right now the average wind farm is about 150 turbines. Each wind turbine needs 80 gallons of oil as lubricant and we're not talking about vegetable oil, this is a PAO synthetic oil based on crude... 12,000 gallons of it. That oil needs to be replaced once a year.

“It is estimated that a little over 3,800 turbines would be needed to power a city the size of New York... That's 304,000 gallons of refined oil for just one city.”

Wind turbine accidents, like the one in Sweden on Saturday, are not uncommon, windAction reports:

“The Swedish incident comes after the collapse of a Nordex N149 in Germany in October 2021.

“Sweden is the home of some of the largest wind projects in Europe, many of them using the most powerful new turbines on the market.

“The country has seen several accidents at new projects, including the collapse of a Vestas V150 and a blade failure on a 5.3MW-158 GE Cypress.”