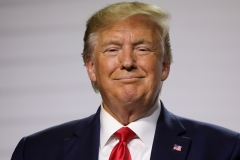 “The president has recorded his best job approval on record,” Zogby Analytics noted Wednesday, revealing the results of the polling company’s latest survey.

“His law and order message is resonating with urban voters” more than it did a year ago, Zogby reports:

“Another factor continuing to help the president's high approval rating is a rise in crime in our nation's biggest cities. Unlike a year ago, the president is performing well with voters in large cities. It's highly likely he is benefiting from the uptick in violence. His law and order message is resonating with urban voters at the moment.”

What’s more, 62% of union voters voiced approval of the president’s job performance in the survey.