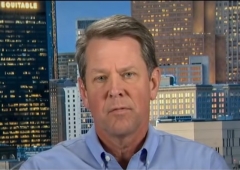 (CNSNews.com)- On Monday, Georgia Gov. Brian Kemp (R) called it "ridiculous" to say that states that have started to reopen certain parts of their economy are prioritizing greed and businesses above saving lives - since people can't "shelter in place" if they lose their homes because they can't pay their mortgages.

Kemp was joined by Oklahoma Gov. Kevin Stitt (R) and Iowa Gov. Kim Reynolds (R) at a press conference webinar hosted by the Committee to Unleash Prosperity and FreedomWorks announcing their new joint report: Grading the 50 Governors on Opening Their State’s Economies.

Kemp was asked by Stephen Moore, the co-founder of Committee to Unleash Prosperity, to respond to critics saying Republican Governors are putting greed and business over saving lives by beginning to reopen certain sectors of their economies.

“I mean that’s ridiculous, number one. All the decisions that we have made have been for our citizens’ safety and public health,” Kemp said. In fact, Kemp said, Georgia is reaching the point where the shutdown is doing more harm than good to public health:

“People can’t pay their rent, they can’t make their car payment, they haven’t been able to make their credit card payment. And people do desperate things when they get desperate, and there’s bad health outcomes that are out there on that. We’re seeing that in our trauma centers right now with domestic and child abuse issues, the suicide rates potentially going up. So, I think you have got to keep that balance out there: the public health, but also just the reality in the real world.”

Gov. Kemp, who is maintaining social distancing guidelines as he gradually reopens Georgia's economy, also warned of the folly of over-dependence on government:

“And, as you know, we’re not a country that was built on government doing everything for everybody. And people that are being led by political leaders, you know, they want to believe those leaders and they want to be able to follow them. If you’re not enacting policies that are reasonable and do that, the public will not go along with it.

“And I think that’s why the governors that were on the call today have taken measured steps as we moved into this crisis. Now, as we built up our hospital bed capacity, as we’re seeing the lowest rates of ventilator use and the flattening of the curve, the curve going the right way and all this other data that we’re looking at every single day, besides just some chart on the wall. You know talking to hospitals - we got a major hospital provider in Georgia, they have 11 institutions, many of them in the metro Atlanta area, and other big areas around the state, they peaked back on March the 31st.

“So, I think we have to follow the data, protect the public health, but we also have to measure the responsibility as we have for government leaders to be able to provide services. When you think about Medicaid funding, school funding, meals for our kids. You know, our food banks are being overrun right now and we have our farmers that are literally plowing crops up.

“There are huge ramifications on that, as well, and we know who we need to protect now in this virus. And that is the elderly and the medically-fragile and make sure our citizens are acting in responsible ways to continue to slow the spread to a reasonable amount that protects your healthcare system.”

Oklahoma Gov. Kevin Stitt echoed Kemp’s comments, adding that “the goal was never to have zero cases” before reopening the economy, because that would be realistic:

“Again, I will sit down and argue the data in Oklahoma any day with anybody,” Stitt said. “We have 236 people in the hospital across the state being treated for COVID symptoms. We’re built for 4,600 COVID patients in the State of Oklahoma. So, we have the capacity and the goal was never to have zero cases before we safely and measurably started reopening."

“We are protecting the health and lives of Oklahomans, first and foremost. We’re building that capacity, we have been building up the supply of our PPE to keep our first responders, our nurses protected and we feel like it is the right time to have a measured reopening, at least in my state that’s what the data is showing.”