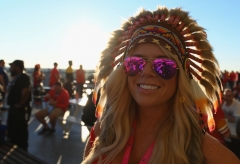 A Chief's fan wears a headpiece during Super Bowl LIV between the Kansas City Chiefs and the San Francisco 49ers at Hard Rock Stadium in Miami Gardens, Florida, on February 2, 2020. (Photo by ANGELA WEISS/AFP via Getty Images)

The Kansas City Chiefs announced on Thursday that they will prohibit fans from entering Arrowhead Stadium wearing headdresses and said that while face painting is still allowed “face paint that is styled in a way that references or appropriates American Indian cultures and traditions will be prohibited.”

“While we have discouraged fans from wearing headdresses for several years, effective immediately, fans will be prohibited from wearing headdresses into the stadium,” the Kansas City Chiefs announced in a statement. “Face painting is still allowed for all fans, but any face paint that is styled in a way that references or appropriates American Indian cultures and traditions will be prohibited.”

The Chiefs said they will ask fans to “to remove any American Indian-themed face paint prior to passing security screening outside the stadium.”

“In 2014, we began a dialogue with a group of local leaders from diverse American Indian backgrounds and experiences,” the statement begins. “As an organization, our goal was to gain a better understanding of the issues facing American Indian communities in our region and explore opportunities to both raise awareness of American Indian cultures and celebrate the rich traditions of tribes with a historic connection to the Kansas City area.

“[T]hese meaningful conversations with the American Indian Community Working Group helped us educate ourselves and our fans, and our partnership with these leaders has helped guide our American Indian Heritage Month Games, as well as the ceremonial Blessing of the Drum and the Four Directions of Arrowhead Stadium,” the Chiefs said.

“Our discussions also led us to discourage fans from wearing ceremonial headdresses and American Indian-themed face paint in our stadium. We are grateful to the members of the working group for their counsel and collaboration, and we look forward to continuing our partnership,” the team added.

Among other changes the Chiefs announced, they will review pregame traditions such as the “Arrowhead Chop,” and the beating of a large drum.

Finally, they announced they will “continue with many of the traditions that we have introduced over the past six years, including the Blessing of the Four Directions, the Blessing of the Drum, as well as inviting members of tribes with a historic connection to our region to participate in our American Indian Heritage Month Game.”

The Chiefs are scheduled to open the NFL season on Thursday Sept. 10 at Arrowhead Stadium against the Houston Texans. They announced on Monday they will limit attendance to 22 percent capacity, or approximately 16,000 fans for early season games.