Schumer: ‘Woe Is to Us,’ if Congress Doesn’t Spend Trillions to Combat Climate Change 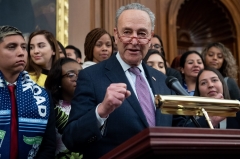 (CNS News)- Following the remnants of Hurricane Ida hitting the northeast, bringing heavy rain and flooding on Wednesday, Senate Majority Leader Chuck Schumer (D-N.Y.) said “global warming is upon us,” and it will get “get worse and worse and worse,” unless Congress approves the trillions of dollars of new spending in Democrats’ infrastructure and budget reconciliation bills.

“Global warming is upon us,” Schumer declared at a news conference on Thursday, in which he appeared to cite Hurricane Ida as his evidence:

“When you get two record rainfalls in a week, it is not just coincidence. When you get all of the changes that we have seen in weather, that is not a coincidence. Global warming is upon us and it is going to get worse and worse and worse unless we do something about it. And that is why it is so imperative to pass the two bills: the infrastructure bill and the budget reconciliation bill. The second deals with climate change and will reduce the amount of carbon we've put into the atmosphere by fifty percent by 2030.”

“The first bill deals with infrastructure and built in that infrastructure is something I have started fostering with [Superstorm] Sandy. That we don't just build infrastructure, but we built resilient infrastructure,” Schumer said. “So, when these floods or fires or anything else occurs, they are much more resistant. And you saw some results of that from the Sandy money. But, we need much more of it. And these bills do that.”

“Woe is to us,” if Congress doesn’t pass these bills to combat climate change, Sen. Schumer concluded:

“Woe is us if we don't recognize these changes are due to climate change. Woe is us if we don't do something about it quickly. Both in building resilient infrastructure, and going to clean power. Whether it is in homes, in electricity, in transportation, to stop the global warming or at least reduce its awful effects on this country.”

Heavy rains and flooding from the remnants of Hurricane Ida ravaged the northeast on Wednesday, killing at least 14, including eight in New York City alone.

Last month the Senate passed a $1 Trillion infrastructure package in a 69-30 vote with 19 Republican senators voting for the package. The House is expected to have a final vote on the package by Sept. 27. The $3.5 trillion budget reconciliation bill has had resolutions to begin work on it passed in both chambers, but has not yet come to a final vote in either chamber.