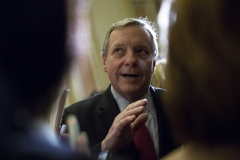 “The hell it isn’t: it’s an information highway,” Durbin said Tuesday in an appearance on CNN’s “New Day”:

“When it comes to expanding broadband across America, there's some Republicans that say, ‘No, that isn't a highway.’ The hell it isn't. It's an information highway that should be available to every single American.”

“I'd like to turn to infrastructure and the big push here in Washington and ask you a simple question, but I think a really important one given where this debate has gone. How do you, senator, define infrastructure?”

Durbin responded that infrastructure includes everything from broadband and clean water to job creation:

“Well I can tell you, I do not exclude clean drinking water from the responsibilities of government and, not only dealing with public health issues, but creating jobs in America. And we have 23 percent of all the lead pipe leads in America in the Chicagoland area. You bet I want to clean up this water supply, and I consider that infrastructure.

“When it comes to expanding broadband across America, there's some Republicans that say, ‘No, that isn't a highway.’ The hell it isn't: it's an information highway that should be available to every single American. Jerome Powell, the chairman of the federal reserve on "60 minutes" Sunday night made it clear that we are just on the verge of a dramatic economic comeback. First, we have to deal realistically and effectively with the pandemic, and then get prepared. America, we're going to be creating good paying jobs and Joe Biden wants to lead us into that.”

“Broadband internet is the new electricity. It is necessary for Americans to do their jobs, to participate equally in school learning, health care, and to stay connected. Yet, by one definition, more than 30 million Americans live in areas where there is no broadband infrastructure that provides minimally acceptable speeds. Americans in rural areas and on tribal lands particularly lack adequate access,” the plan reads.

“The President believes we can bring affordable, reliable, high-speed broadband to every American through a historic investment of $100 billion.” the plan says.

On Monday, Biden met with a bipartisan group of senators to discuss his infrastructure proposal at the White House.