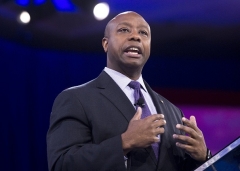 On Friday, Yahoo! News reported that Obama said in a phone call with former members of his administration that the Trump Administration’s response to the coronavirus pandemic was an “absolute chaotic disaster.”

“What we’re fighting against is these long-term trends in which being selfish, being tribal, being divided, and seeing others as an enemy — that has become a stronger impulse in American life,” Obama said, according to Yahoo! News. “And by the way, we’re seeing that internationally as well. It’s part of the reason why the response to this global crisis has been so anemic and spotty, Obama added.”

“It would have been bad even with the best of governments,” Obama said, turning his sights on Trump:

When Scott was asked by Host Neil Cavuto to respond to Obama’s comments, the senator said that, instead of making unhelpful, divisive remarks, Obama should be encouraging all America to put aside difference and work together to combat the COVID-19 threat to health and prosperity:

“Yeah, No doubt. I'd say that the former president's comments were unhelpful, unnecessary and unfortunate. The truth is when you're in the middle of a pandemic, a global pandemic that the world has never seen before, let's focus on all-hand-son-deck, pushing in the same direction.”

Sen. Scott added that any other conversations should be put on hold until the coronavirus pandemic has ended and the U.S. economy is back up and running:

“We need to get our economy back open, at the same time we need to continue to flatten this curve, and to reinvest in testing, testing, testing, and if the comments are not heading in that direction, then we're having a conversation that should be delayed until after we are beyond this pandemic or at least on the tail end of the pandemic, and we're not there yet.

“We have a lot of work that needs to be done. We need every single mind focusing on how, to A), keep Americans healthy and B) reignite this economy because that for, unfortunately, will need to even more deaths than we have predicted so far.”