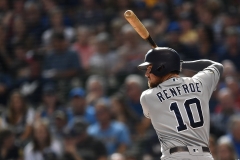 (CNSNews.com) -- Speaking at a news conference on Monday, Tampa Bay Rays outfielder Hunter Renfroe said there are “zero people on this team even mentioning opting out” of the 2020 Major League Baseball season because of COVID-19. He added, “we want to go out there and we want to win it all.”

“As far as the Rays, there has been no discussion for anybody to opt out for the Rays,” Renfroe said. “There’s been none. We all want to get out there, we all want to play and we all want to win. It’s not a deal where we just want to go play 60 games this year.”

“We want to go out there and we want to win it all,” he said. “So, we’re in it for the long haul. And there has been zero people on this team even mentioning opting out.”

Manager Kevin Cash #16 of the Tampa Bay Rays checks on prospect Garrett Whitley after Whitley was hit in the face by a foul ball off the bat of Renato Nunez of the Baltimore Orioles during the fourth inning of a Grapefruit League spring training game at Ed Smith Stadium on March 02, 2020 in Sarasota, Florida. (Photo by Julio Aguilar/Getty Images)

Manager Kevin Cash said, “As far as the season getting underway, look, we’re here, we’re training for it, we’re getting ready for it. I still -- like I said, I think there are things that continue, that need to be ironed out. And we’re learning day by day as we go. But there is a sense of optimism that with the way we’ve handled things thus far that we can manage this.”

Last week, the MLB and the MLB Players Association announced 38 positive COVID-19 tests of players and staff of the 3,185 total samples collected, as a part of the mandatory Intake Screening process. On July 6, the MLB revised the total number of samples collected to 3,740.

According to CBS Sports, the Rays have not had a player or staff member test positive.

Dusty Baker, manager of the Houston Astros during the fourth day of Summer Workouts at Minute Maid Park on July 07, 2020 in Houston, Texas. (Photo by Bob Levey/Getty Images)

The MLB will now test players and Tier 1 staff every other day until the end of the 2020 World Series.

The Tampa Bay Rays open their 2020 season on July 24 at home against the Toronto Blue Jays.