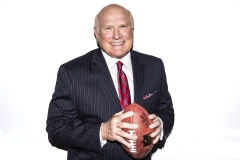 (CNSNews.com)- Speaking on Fox News’ “Cavuto Live” on Saturday, FOX Sports analyst and Pro Football Hall of Fame Quarterback Terry Bradshaw said "I do believe you're going to have football,” this year - even if there are no fans in the stands due to the coronavirus pandemic.

Bradshaw was asked by Host Neil Cavuto “What do you think of this - games on?"

“I'm probably like everyone else: I'm excited that if we can -- and we're going to have the NFL season,” Bradshaw replied. "We’re all sitting here, I've already had two phone calls this morning about what's going to happen. Do you think the fans will be in the stands and so on, so forth?"

"That just depends on how this virus continues," Bradshaw answered:

“If it starts going the downward trend and we feel safe enough and people go with the masks and rubber gloves and whatever, they will have people in the stands. If we don't have people in the stands, I think the games go on. I do believe you're going to have football and at FOX, I mean, with Tom Brady coming over with Tampa Bay now, it's an exciting time for us and I think our viewers out there should sit back and relax and think this is going to help take some of the stress off. But I do believe the NFL will be broadcast, absolutely.”

Cavuto responded that, while a half-empty stadium might be fine to those who watch on television, the experience might be “a little weird” for the players and those fans who show up at the games:

“You know, I just wonder how it will be. It's one thing to see the games. I think if you were a television viewer, it might not matter as much whether there are fans in the stands. But, obviously, if you're there and, maybe, for the players it will be a little weird. Assuming right now that, at best, we're looking at limited capacity or they fill the stands at 50 percent capacity, I have no idea. How is all of this going to go down?"

“Well, you know, I don't either. Nobody does,” Bradshaw said, adding that it all depends on how the virus plays out and whatever NFL Commissioner “Roger Goodell and his staff will come up with”:

“It just depends on -- listen, we've got roughly four-and-a-half, five months. I can't imagine that things are going to be as they are right now. I've got to believe things are going to be better. Now, I told my wife, I said look, it could be odd seating on the first home game, then it could be even seating on the second home game. Who knows what Roger Goodell and his staff will come up with? He's a smart man and the solution will be -- it will relate to the problem.

“But I do believe -- even if we had -- hey listen, Neil, even if we had empty stands, if we're -- if we've got our cameras there and we're doing a game, I can promise you it's going to be exciting. The players may not feel the energy from the crowd but they'll be thrilled to be out there playing. It will just be different and we can adjust to being different. We have to."

Last Thursday, The NFL released its 2020 schedule, slated to begin with the Houston Texans taking on the Kansas City Chiefs on Thursday Sept. 10. Commissioner Goodell said in a statement that “We will be prepared to make adjustments as necessary”:

“The release of the NFL schedule is something our fans eagerly anticipate every year, as they look forward with hope and optimism to the season ahead. In preparing to play the season as scheduled, we will continue to make our decisions based on the latest medical and public health advice, in compliance with government regulations, and with appropriate safety protocols to protect the health of our fans, players, club and league personnel, and our communities.

"We will be prepared to make adjustments as necessary, as we have during this off-season in safely and efficiently conducting key activities such as free agency, the virtual off-season program, and the 2020 NFL Draft.”

The NFL has cancelled all five of its international games for 2020 due to the pandemic, playing those game in the United States instead.