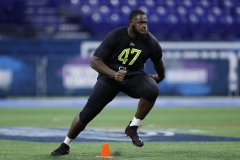 (CNSNews.com)-Andrew Thomas, an offensive tackle drafted fourth overall in the 2020 NFL Draft by the New York Giants, says he’s driven by his “faith in God.”

When, Thomas, who played at the University of Georgia from 2017-19, was asked “What drives you?” by New York Post Columnist Steve Serby, the top NFL prospect replied:

“I would say first, my faith in God … just having something else to lean on that’s bigger than me to stand on.

“Second, I would say my family. Definitely want to be able to take care of my family financially, obviously – but, more so representing the family name that they’ve given me, that means a lot to me. And then lastly, just myself. I’m a competitive person; I work hard, and I want to reach all my potential.”

Thomas was also asked about one of his tweets, in which he wrote that “The goal in life is not to look for blessings, but to be a blessing to others.”

“With this platform that God has given me, it’s not about me. Obviously, I’m blessed, but the biggest thing, the biggest goal in life, being a man of faith, is giving back to others and being a blessing to others with the blessing that I’ve gotten,” Thomas replied.

Thomas said that he owes his faith to his mother’s influence:

“She’s ridiculous. She cares so much for everyone. She doesn’t say ‘No’ much. A woman of faith, that’s one thing she definitely instilled in me. She’s just so strong; a lot of stuff goes on, and she stays level-headed and does what needs to be done.”

A three-year starter at Georgia, Thomas won the SEC’s Jacobs Blocking Trophy in 2019, was a Walter Camp All-America 1st Team honoree and was voted to the All-SEC 1st Team by Coaches and Associated Press.