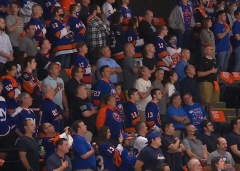 (CNSNews.com)- Prior to game 6 of the National Hockey League second round playoff game between the Boston Bruins and the New York Islanders at Nassau Coliseum in Uniondale, N.Y. on Wednesday night, Islanders fans assisted national anthem singer Nicole Raviv with the singing of the “Star Spangled Banner.”

The Islanders won the game 6-2 to win the playoff series 4 games to 2. They will now take on the defending Stanley Cup Champions, the Tampa Bay Lightning in the NHL Semifinals.