Rep. Boebert to Biden Admin: 'These Are Our Children, Not Yours. Back the Hell Up' 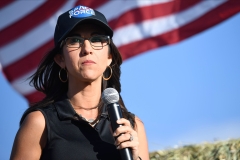 (CNSNews.com) – Rep. Lauren Boebert (R-CO) called out the Biden Administration's unsettling promotion of gender reassignment surgeries on children, saying “Get out of our lives, get out of our homes, these are our children, not yours. Back the hell up," while speaking with Fox News host Laura Ingraham Thursday.

Boebert appeared as a guest on Ingraham’s show, relaying her concern about children and how American tax dollars may be used to support gender reassignment surgeries on boys and girls due to the Biden Administration and Secretary of the U.S. Department of Health & Human Services (HHS) Xavier Becerra’s promotion of the transitioning of children.

“You know, five years ago if you would have said that this is where all of this is leading, we would have been called crazy and here we are, you have somebody saying that pedophilia, that’s too degrading to call it so we're going to call it MAPs [minor-attracted people]. What in the world is happening in America?"

Below is a transcript for this portion of the segment:

Lauren Boebert: “For the record, you favor HHS’ funding being able to -- for sex reassignment for surgeries on minors.”

Xavier Becerra: “I will do everything I can to defend any American, including children, whether or not they fit the categories you have mentioned or not and if they talk about gender-affirming care, I am there to protect the rights of any American.”

Laura Ingraham: “Joining us now is the aforementioned Congresswoman Lauren Boebert. Congresswoman, I want to get to your views on this MAP, these MAP freaks on Twitter. But, I first want to ask about that exchange with Secretary Becerra. He believes that this type of surgery for non-adults is protecting children? Really?”

Boebert: “Laura, this is absolutely disgusting and as you’ve stated on your show, this is not only repulsive, but it’s child abuse. Secretary Becerra, he is a lawyer, he's a politician, he’s a bureaucrat, and even he is making these professions look bad. It is a sad day in America when the secretary of Health and Human Services is using his position of influence to promote gruesome gender reassignment surgeries on children. Now, we know that his record is not very good. It’s actually pretty pathetic on protecting children and parental rights. So, when he came into our committee, I asked him about those things. I asked him if our tax dollars were going to these surgical gender reassignments on children, these gruesome gender reassignments. He had no answer. I asked him if parents who don’t agree with this gender-affirming care and don’t want to mutilate their children if they ae at risk, if they are in danger of having their children removed from their home. He didn’t have an answer for that either. I even asked him if men could get pregnant, simple as that, and he danced around that question, Laura. So, I have many questions for him that I asked him on that day and we’re seeing that they are doing anything in their power to protect these people who want to sexualize and groom our children and now to hear on your show tonight that we have these minor-attracted persons, what is this world coming to? You know, five years ago if you would have said that this is where all of this is leading, we would have been called crazy and here we are, you have somebody saying that pedophilia, that’s too degrading to call it so we're going to call it MAPs. What in the world is happening in America?"

Boebert: "We have to start talking about this and get it right, you know? And really, it’s not something comfortable to talk about. It’s not comfortable –”

Ingraham: “ Well, they call these conspiracy –”

Boebert: “Not yours, back the hell up.”

Ingraham: “You know what they’re saying in response, Congresswoman? They’re saying you and others, probably myself, that we’re spouting conspiracy theories because we’re actually quoting these people whether it’s on Twitter, or whether we’re talking about the inability to define a mother, and they’re called birthing persons now so as not to offend a radical –”

Ingraham: “-- fringe. Those are facts. They don’t want to actually –”

Boebert: “I am going to call on him to be removed for what he is doing to promote this mutilation of children in America. This is absolutely disgusting, what’s coming out of his department. And not only that, but look at what’s going on at our southern border and removing –”

Boebert: “-- Title 42 right before the summer months, when they know that there’s going to be a surge --”

Ingraham: “No, this is all a part of the plan.”

Boebert: “-- November, it truly is, to completely disrupt –”

Ingraham: “Yeah, we got to go, Congresswoman –"

Boebert: “Our country and –”

Ingraham: “Yeah, this is -- everything is being turned upside down, this is…it’s not – this is –”

Ingraham: “People don’t understand, this isn’t a – this isn’t some kind of weird, you know, like, coincidence. This is all happening for a reason, okay? This is their policy, okay? Congresswoman, we appreciate you joining us, thank you.”

Emily Robertson is a CNSNews intern and a senior at Liberty University studying Strategic Communication with a double minor in Government and Politics & Policy. She has written for the Liberty Champion as an opinion writer and news reporter, as well as participated in other extracurricular activities involving law and politics.