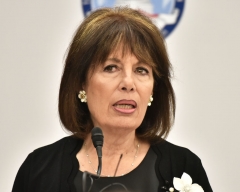 Congresswoman Jackie Speier (CA) speaks at A Conversation with U.S. Lawmakers about Religious Persecution hosted by the Ahmadiyya Muslim Congressional Caucus and the Tom Lantos Human Rights Commission at the U.S. Capitol on July 16, 2019 in Washington, DC. (Photo by Shannon Finney/Getty Images)

In a Feb. 1 tweet, Rep. Jackie Speier (D-Calif.) raised the question of whether Republicans should be referred to as the "terrorist right," a point that many of her followers on Twitter applauded.

“The Republicans have been calling Democrats the radical left," Speier tweeted. "Time to call Republicans the terrorist right?"

Her tweet drew a lot of attention from people echoing their support of her statement.

“They’re WhiteISIS - they use religion and nationalistic fervour to recruit new fanatics via social media, then unleash them in violent insurrectionary attacks against their fellow citizens and their government,” said a Twitter user with the handle @Cannadablissed.