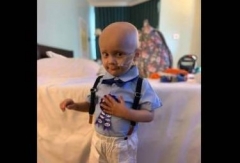 Chicago looters and rioters ruined the birthday celebration of 2-year-old Owen Buell, who lives with his family at the Chicago Ronald McDonald House while being treated for Stage 4 neuroblastoma, reported the Gateway Pundit.

Owen Buell’s family is one of the approximately 30 families who stay at the house. The house, located only 5 blocks from Lurie Children’s Hospital, is the perfect place for sick children receiving treatment.

The family was hoping to take Owen home to see his siblings in Joliet, a suburb outside Chicago, but the plans were cancelled due to the violent riots and looting that started on Sunday.

Entrance to Ronald McDonald House boarded up due to damage from rioting. (Screenshot, CBS 7)

Owen’s mother, Valerie Mitchell, told local station WBBM, “We were going to have cake and ice cream and do some presents at home with his siblings and his grandma,” reported the Gateway Pundit.

The hospital did not want families to leave the house, indicating the severity of the situation, “We got a phone call from the nurse saying that none of the nurses could make it in for safety concerns and they didn’t want any families in the middle of that trying to walk into Lurie’s,” Mitchell continued.

She described the damage to the Ronald McDonald House, located less than a mile from the hard-hit Mag Mile, “The whole door was shattered and it looked like a bullet hole, so I started freaking out thinking about how unsafe that was.”

“You shouldn’t feel that way when your kid needs medical care,” she said. “You shouldn’t be afraid to walk a few blocks down the street.”

The Washington Times reported that the house was placed on lockdown and several windows on the front of the house were shattered, and the front door had to be boarded up.

White House Press Secretary Kayleigh McEnany reacted to the damage of the Ronald McDonald House in a tweet, calling it, “sad and unacceptable,” and declared, “The liberal mayor must control her streets!”

"The Ronald McDonald House in Chicago was vandalized during looting early Monday morning while families & their sick children huddled inside."

The liberal mayor must control her streets!https://t.co/xu1G99LZrV