Former CBP Chief: Under Biden, Smugglers’ ‘Bank Accounts Are Being Filled on the Backs of Migrants’ 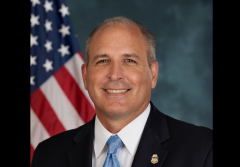 In an interview with House Rep. Dan Crenshaw (R-Texas), the former Acting Commissioner of U.S. Customs and Border Protection, Mark Morgan, said the “bank accounts” of smugglers “are being filled on the backs of the migrants, and at the cost of our national economic security.”

“First of all, it is a crisis” at the U.S.-Mexico border, said Morgan, during the Mar. 9 edition of the podcast “Hold These Truths with Dan Crenshaw.” Morgan was the CBP acting commissioner in 2019-2021. He also served for three months as the acting director of ICE in 2019.

In the past, “a thousand apprehensions was a bad day, and we’re looking right now at 4,500 to 5,000 per day,” he added.  This figure corresponds with February’s fiscal year-to-date border apprehension and enforcement statistics issued by the U.S. Customs and Border Protection.

“The border patrol agents, they’re demoralized right now,” said Morgan. “I just got an email from a long-time border patrol agent who said, ‘Sir, there’s a lot of people here who are ready to retire even though it’s not mandatory because they know what’s coming.’”

“These are deplorable conditions, this should not be happening, especially in the middle of COVID,” he added.

Illegal aliens demonstrate at the U.S.-Mexico border to be let into the United States. (Getty Images)

Morgan attributed the start of the crisis to Obama’s 2014 Deferred Action for Childhood Arrivals (DACA) policy and the Flores settlement agreement of 1997, which came about from the Flores vs Reno California court case. The original agreement changed standards for the housing of unaccompanied minors, making it so children must be released within 20 days of detainment. However, a 2016 U.S. Court of Appeals ruling expanded these policies to also include accompanied minors.

“DACA was unlawful and unconstitutional, that is what started the crisis, the first wave of unaccompanied children,” Morgan told Crenshaw. “Because with DACA, the dreamers now, if you came, it was an incentive to come here illegally, and then you would be allowed to stay.”

“[The] Flores settlement agreement came in, and that’s when they said that we cannot keep unaccompanied children for more than 20 days,” he said. “It’s impossible to get through the immigration process in 20 days. So that meant if you were an unaccompanied minor, you were free, never to be heard from again. First wave.”

“Then the Flores settlement agreement was reinterpreted in [2015-16] to also apply to families,” said Morgan. “So then we saw that unaccompanied minors start to go down because now they didn’t need to come across by themselves, they could just form a family, and now THEY were let in.”

“Again, according to the Flores settlement agreement, we could not keep children or families for more than 20 -- that meant that they were released. And by 2019, fast forward, that’s where we’re at. That was the genesis of the crisis.”

“So, it’s not just about the numbers, because congressmen, a lot of people will go back to the late ‘90s, early 2000s and say, ‘Oh, we had well over a million at that time.’ Well, first of all, almost 98% were single, adult males, most of them were Mexican citizens, and we were able to remove them quickly,” said.

“Because of 2019, because of what had transpired over the previous few years, we were seeing families and unaccompanied minors,” said Morgan, “so that demographic, our system was not designed for that, our system was designed for single adult males, and that’s really what led to the crisis.”

Because these recent trends have made smuggling migrants lucrative for cartels, “their business is back on,” said Morgan. “It’s a booming business for the smugglers right now, and they’re laughing all the way to the bank.”

Congressman Crenshaw added, “This is zero risk to the drug cartels, and even better than smuggling drugs in some ways.”

Morgan emphasized, too, the degree to which the crisis is due to bad policy. “This was a self-inflicted wound,” he said. “Right now, while we’re still trying to get kids back to school, and businesses open, and people back to work, and now is the time that you’re going to open up your borders? Now?”