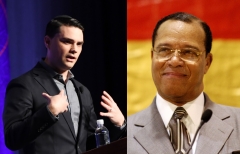 When a Capitol Police officer died on Jan. 6, he made national news, but when a black Nation of Islam supporter allegedly killed an officer in early April, it was simply a “local news story,” contested conservative author Ben Shapiro.

"here's the way it works when it comes to crime stories: if there is a crime story that backs the media narrative that America is systemically racist and evil and filled with white supremacist right-wingers, then that's a national story," Shapiro claimed. "If a person who is not moving along with that narrative commits a murder in a high-profile fashion, that's not a national news story; that's a local news story."

Below is a full transcript of the segment:

Ben Shapiro: So, over the weekend, there was a rather major story, but it's not a major story because here's the way it works when it comes to crime stories: if there is a crime story that backs the media narrative that America is systemically racist and evil and filled with white supremacist right-wingers, then that's a national story. If a person who is not moving along with that narrative commits a murder in a high-profile fashion, that's not a national news story; that's a local news story.

So if a white person kills a black person on the street, that's a national story because it underscores the idea that America is evil and systemically racist and "how could we be such a terrible country?" If a black person kills a white person on the street, which in terms of statistical probability, is actually more likely to happen, that's not a national story; that's a local news story.

Okay, if you -- perfect example over the weekend. It turns out that there was an attack on the U.S. Capitol Police. A member of the U.S. Capitol Police was killed by a person who drove a car into two U.S. Capitol Police officers, then got out of his vehicle with a knife, and then he was shot by the Police. The immediate response by the media, by many of the media, was this has to be some sort of white supremacist, right? This has to be a QAnon guy or something. Well, it turns out not. It turns out that the attacker was a 25-year-old black man who was a follower of Louis Farrakhan's Nation of Islam. This person's Facebook page describes himself as a follower of Farrakhan, in which he said that Farrakhan was Jesus. He said that he was his spiritual father and he called himself Noah X.

Many Twitter accounts initially rushed to assume the attack was carried out by a white supporter of former President Trump but the minute that it turned out that this was a Louis Farrakhan supporter, boom, it was gone from the media. You haven't heard about it at all; you haven't heard about it at all. Just as many Police officers were killed this week at the U.S. Capitol as were killed on Jan. 6 and there was one Police officer -- we still don't know how he died, we don't even know if he was murdered at the Capitol -- but officer Brian Sicknick died -- maybe presumably, I mean again, the facts are still coming out -- during the Jan. 6 attacks and a U.S. Capitol Police officer was just murdered over the weekend. It is not a national news story because of the identity of the perpetrator. The media have decided it's not a national news story because they are partisan hacks, because all they care about is the Democrat-leaning narrative, and let me just tell you this: if that had been a Donald Trump supporter, every Republican in America would have been asked about how your vote for Donald Trump effectuated this kind of thing. But this person was a follower of Louis Farrakhan. Will a single Democrat who has met with Louis Farrakhan be asked about this? Will a single Democrat who's made nice with Louis Farrakhan -- I’m talking about Rep. Hank Johnson, I’m talking about Rashida Tlaib, I’m talking about Ilhan Omar, I’m talking about all the Democratic members who have been warm with figures from Nation of Islam -- will any of those people be asked at all about their association with a person of that ideology?  No, don't be silly. Don't be silly, because that, of course, is a local news story.