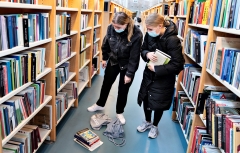 A Room of Your Own, a book club for teenage girls that was created to empower young women and spark conversation, was notified by a TDSB superintendent that the board would not support the event promoting the two books that had been chosen for the club.

The books in question were written by two influential women: Marie Henein and Nadia Murad. Henein, the daughter of Egyptian immigrants, rose to the top of the Canadian legal profession as an articulate, intelligent defense attorney. She wrote Nothing But the Truth: A Memoir.

Murad, a victim of the Yazidi genocide, was kidnapped and forced into sex slavery by the Islamic State when she was 19. Murad escaped, testified before the United Nations Security Council, became a UN ambassador on human trafficking, and was awarded the Nobel Peace Prize. Murad authored The Last Girl: My Story of Captivity, and My Fight Against the Islamic State.

Tanya Lee, the organizer of the book club, explained that the school board’s equity department thought Henein would send the wrong message because she represented Jian Ghomeshi, a Canadian broadcaster and musician, in his 2016 sexual assault trial.

“They told me straight out ‘no’ because [Henein] defended Jian Ghomeshi and how do you explain that to little girls,” Lee told The Globe and Mail.

Regarding Murad’s event, the school board claimed her book could “promote Islamophobia” and thus might “offend” their Muslim students. Lee sent articles from BBC and CNN to the superintendent, attempting to educate her on the Islamic State.

“This is what Islamic State means,” Lee wrote. “It is a terrorist organization. It has nothing to do with ordinary Muslims. The TDSB should be aware of the difference.”

In May, the United Nations Investigative Team for Accountability of Da’esh/ISIL (UNITAD) officially classified the crimes committed against the Yazidis -- a northern Iraq religious minority group -- as genocide.

“A professional woman of the city where the school board is located with impeccable credentials, career achievement, articulate and confident: this is precisely the kind of person an equity department concerned with inspiring young girls doesn’t want showing up at a book club,” Murphy wrote.

Naomi Buck, a Toronto-based freelance journalist, described how distorted the TDSB’s views and interpretations of these two books must be in order for them to be classified as offensive.

“Only through such gross misreadings -- one in which Ms. Henein is conflated with her client, and another in which a group called the Islamic State somehow represents the Islamic faith -- can these books be seen as offensive to TDSB sensibilities” Buck wrote in The Globe and Mail.

Some of the reviewers of Murad's book said the following,

“This devastating memoir unflinchingly recounts Murad’s experiences and questions the complicity of witnesses who acquiesced in the suffering of others.” —The New Yorker

"Her book is sobering—and an inspiration." —People

“Murad gives us a window on the atrocities that destroyed her family and nearly wiped out her vulnerable community. This is a courageous memoir that serves as an important step toward holding to account those who committed horrific crimes.” —The Washington Post

“This is likely the most inspiring feminist memoir out this year.” —Bustle

“Nadia Murad's courageous account is horrific and essential reading. . . . Anyone who wants to understand the so-called Islamic State should read The Last Girl.” —The Economist

“Surpassingly valuable. . . . With her new book, The Last Girl, Nadia Murad has assumed the stature of an Elie Wiesel for her people. . . . As much as it is an account of the Yazidi genocide, the book is also a loving ode to a way of life that has now been all but obliterated.” —Jewish Journal