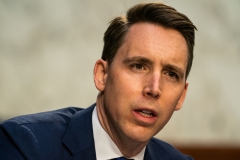 Sen. Josh Hawley (R-MO) slammed the Biden Administration for ignoring the “violent crime surge across our country,” and instead working “to shut down parents from speaking” out about critical race theory on Sunday's "Life, Liberty & Levin."

"This is about using federal law enforcement to try and intimidate parents because these parents are daring to stand up and criticize critical race theory," Hawley said, referencing a letter sent by Attorney General Merrick Garland to the FBI on Monday, Oct. 4.

"As we’re seeing violent crime surge across our country, homicides, a year-on-year high, violent attacks are at highs, and the Biden Administration has done nothing. They won’t lift their finger, but yet, they want to shut down parents from speaking, by calling that violence. I mean, it's just -- it is truly extraordinary."

Below is a transcript of this portion of "Life, Liberty & Levin":

Mark Levin: “Last week, you had a hearing at the Senate Judiciary Committee, and the deputy attorney general of the United States was answering questions, or was she? She seemed to be ducking a lot of very significant questions you were asking about the ambiguity of this memo, about the First Amendment, about civil liberties, and so forth. What did you make of her?”

“The idea that they would use the FBI to intervene in school board meetings with the purpose of, let’s be honest, intimidating and harassing parents -- just unprecedented.

“And I said to her, I said, ‘Listen, this isn’t about violence. We all know that if somebody threatens violence, the local police will book that person, will charge that person, they'll get them out of there. This is about using federal law enforcement to try and intimidate parents because these parents are daring to stand up and criticize critical race theory. That’s what this is about.’

“So I said to her, I said, ‘What are the standards? Your memorandum says the FBI is going to investigate intimidation and harassment. Well according to who? I mean, by what standards?’

“And she wouldn’t answer those questions, Mark. She wouldn’t give me any definition, she just kept coming back to, ‘Well, everybody’s against violence.’

“And it’s all in an effort to try and shut down moms and dads -- parents -- who are paying their taxes, who have kids in schools, and by the way, who are voters. And they have a right to express their opinion at school board meetings.

“This is just unprecedented, and I tell you, I’m going to do everything I can to stop it.”

Mark Levin: “You know, Sen. Hawley, this is the same attorney general, when he was testifying in his confirmation, who refused to call the attacks on the Portland federal courthouse acts of domestic terrorism because they happened at night and nobody was there.

“I’m not aware of a pattern of violence in these various school districts, and they haven’t presented any, neither the National School Board Association or the attorney general in his memo.

“I’m not aware that violence is so out of control that local police are unable to handle this. That is an absolute, flat-out lie. Are you aware of any federal nexus or federal basis that would allow the United States Department of Justice and its various instrumentalities to go into school boards to monitor parents, to question parents who dare to become vociferous or provocative?”

Hawley: “None whatsoever, Mark. I mean, I can’t imagine what the basis is for having the FBI get involved here. I will say this, I mean, it’s interesting that the Biden Administration has finally found some form of violence that it doesn’t approve of.

“I mean, as we’re seeing violent crime surge across our country, homicides, a year-on-year high, violent attacks are at highs, and the Biden Administration has done nothing. They won’t lift their finger, but yet, they want to shut down parents from speaking, by calling that violence. I mean, it's just -- it is truly extraordinary. And it’s dangerous and you talked about this earlier. This is a dangerous precedent, to use federal law enforcement to go after citizens, to stop them from speaking about things you don’t like.

“If this is allowed to stand, I shudder to think what will happen in the future, under this administration or any other administration, when it comes to trying to silence law-abiding citizens -- parents, taxpayers -- who are just speaking their mind.