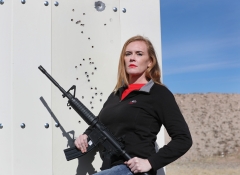 Women have bought almost half of all guns purchased since the beginning of 2019, reported The Wall Street Journal on Sept. 16.

“Researchers and gun store owners attributed the jump to fears driven by the Covid-19 pandemic and protests, sometimes accompanied by violence, that followed the police killing of George Floyd,” stated The Journal.

San Diego resident Elaine Pierce told the Wall Street Journal that she signed up for NotMeSD, an initiative to stop sexual assault and domestic violence, after seeing protests devolve into violent situations in neighboring suburbs.

“I’ve seen violence before, but the police were always there,” Pierce said. With a gun, “you drive into a riot, which we’ve seen on TV, at least you have a fighting chance.”

The survey, created by Deborah Azrael of the Harvard T.H. Chan School of Public Health and Matthew Miller of Northeastern University, polled more than 19,000 adults, making it one of the largest nationally representative, population-based surveys about gun purchasing ever conducted.

Previously, surveys found that women typically made up 10% to 20% of American gun owners, but women now make up about 34% of gun owners in the United States, according to the National Firearms’ survey numbers.

This shift in gun purchases has come after decades of the gun industry attempting to market firearms to women with little success. Their strategy was previously known as “shrink it and pink it,” meaning if you make smaller guns in cute colors, women will be more likely to buy them. Some markets also discontinued strategies that aimed at men, like having women in bikinis posing with new gun models.