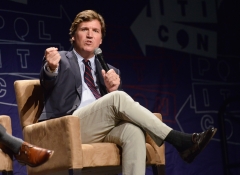 Fox News host Tucker Carlson described Thursday how California teachers are “grooming seven-year-olds and talking to seven-year-olds about their sex lives,” while attempting to hide it from parents.

"California Teachers Association is one of the most powerful unions in the country and it is purely an organ of the Democratic Party," Carlson said. “One first grade teacher called Blaire Wyatt explained that it’s best to hold meetings for gender identity clubs during lunchtime, so the parents never know.”

Carlson interviewed Abigail Shrier, author of "Irreversible Damage: The Transgender Craze," who reported that "even at the elementary school level -- eight and nine-year-olds -- telling them to rename the clubs things like PRISM club, so that the parents won’t know what’s going on in the club and won’t be able to, you know, supervise.”

Below is a transcript of this segment from "Tucker Carlson Tonight":

Tucker Carlson: “California Teachers Association is one of the most powerful unions in the country and it is purely an organ of the Democratic Party. Recently, the union held a conference to discuss how to indoctrinate school children without their parents' knowledge.

“So, if we can get it to happen at lunch, that seems like a really good structure to, you know, protect the kids' identities and protect -- allow them to attend.”

Carlson: "Amazing that they’re admitting this in public. Documents from the conference also show that teachers admit they read students’ Google search histories, looking for signs of interest in gender issues so they can take advantage of them.

“We wouldn’t know any of this was happening if it weren’t for Abigail Shrier; she broke the story. She's the author of ‘Irreversible Damage: The Transgender Craze’ and a very brave person; she joins us tonight.

“Abigail, thanks so much for coming on, for breaking this story. It looks on the face of it, from what we just presented, that these teachers are intentionally trying to hide what’s going on from the parents of the kids.”

Abigail Shrier: “That’s right. The deception is actually the point. It’s explicit and in fact, in both the reporting that I dod on that conference you mentioned in October and then I’ve since seen more recent videos of the California Teachers Association, specifically guiding teachers statewide in deception of parents about the clubs, about the membership, that even at the elementary school level -- eight and nine-year-olds -- telling them to rename the clubs things like PRISM club, so that the parents won’t know what’s going on in the club and won’t be able to, you know, supervise.”

Carlson: “Since when are teachers allowed to get involved in the sex lives of minor children without the knowledge of the parents? That seems like a crime to me.”

Shrier: “Well, you know, in one of the videos I watched put out by the California Teachers Association, the teachers instructed other educators that children as young as seven need support in their sexual identity and they believe it is their job to provide that.

“And look, if this were a matter of parents coming in and saying their child had a particular sexual or gender identity, and they wanted the school to support it, that would be one thing.

“But instead what the California Teachers Association is doing is they’re deciding how to recruit students to these clubs, how to coach them in, you know, solidifying this gender identity or sexual orientation identity, and they’re doing this by deceiving parents, specifically, telling teachers how to keep the existence of the clubs and the membership from the parents.”

Carlson: “I mean, I assume everyone is going to leave public schools at a certain point -- who can -- and homeschool or whatever; this is too much. But in the meantime, is there anything that can be done to stop it?”

Shrier: “You know, I think that parents need to get really explicit with kids about things like gender and tell them that what's being taught in schools is nonsense. And in some cases, you know, if the parents are able to do it, they really should pull their kids out of these schools because this kind of nonsense spreads.

“And the teachers -- look, these are not -- this is not members of LBGTQ doing this. I want to be really clear about that. These are activist teachers. They are looking to peel the children away from the values of their homes and supplant those values with their own.”

“But we are grateful to you for breaking this as you have so many stories like it. Abigail Shrier, thank you, appreciate it.”