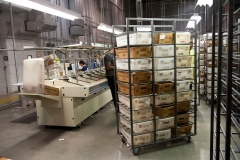 Twenty absentee ballots from South Carolina were accidentally sent to Maryland this week.

This isn’t the first mistake made by SeaChange Print Innovations, which prints and mails absentee ballots for 13 counties in South Carolina, the Post and Courier reports.

Some voters in Greenville County received the wrong absentee ballots this year for the Democratic presidential primary and a special election for sheriff, which were held 10 days apart, according to S.C. Election Commission spokesman Chris Whitmire.

Furthermore, some voters in Charleston County received ballots that were folded in such a way that would make them harder to read by scanning machines, Whitmire said.