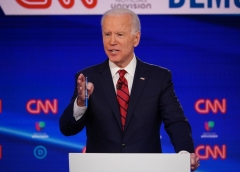 Biden was being interviewed by Charlamagne Tha God, co-host of “The Breakfast Club” morning show, which airs on Power 105.1 in New York City.

Biden’s handler tried to wrap up the interview, which prompted Charlamagne Tha God to object, saying, “You can’t do that to black media.”

HANDLER: Thanks so much. That’s really our time. I apologize.

CHARLAMAGNE THA GOD: You can’t do that to black media.

BIDEN: You can’t do that to black media and white media, because my wife has to go on at 6 o’clock. (looks at watch) Uh oh, I’m in trouble.

CHARLAMAGNE THA GOD: It’s a long way until November. We got more questions.

BIDEN: More questions, but I tell you if you have a problem figuring out whether you’re for me or Trump, you ain’t black.

CHARLAMAGNE THA GOD: It don’t have nothing to do with Trump. It has to do with the fact I want something for my community.

Incidentally, former Secretary of State Hillary Clinton also appeared on “The Breakfast Club” during her presidential run, where she made her infamous line about carrying hot sauce in her purse - a comment that was seen by some as pandering to blacks because it paralleled singer Beyonce’s “I got hot sauce in my bag swag” lyric from the song “Formation.”

Charlamagne Tha God warned Clinton at the time that her comment might be seen as pandering to black people.