Chicago Mayor Calls for Bars, Restaurants to Reopen to Prevent Spread of COVID 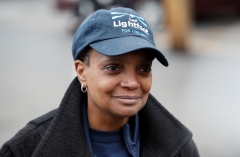 Chicago Mayor Lori Lightfoot called Thursday for the city’s restaurants and bars to be reopened as soon as possible, saying that it will prevent COVID-19 from spreading through private parties, because business owners can enforce social distancing protocols.

“If we have people and give them an outlet for entertainment in the restaurant space, in the bar space, we have much more of an opportunity, in my view, to be able to regulate and control that environment,” Lightfoot said.

“People are engaging in risky behavior that is not only putting themselves at risk, but putting their families, their co-workers, and other ones at risk. Let’s bring it out of the shadows. Let’s allow them to have some recreation in restaurants, in bars, where we can actually work with responsible owners and managers to regulate and protect people from COVID-19,” she said.

Lightfoot said that restaurants have “gone above and beyond to put in mitigation controls.”

“I feel very strongly that we are very close to a point when we should be talking about opening up our bars and restaurants,” the mayor said.

Bars and restaurants were forced to stop indoor service in October under the state’s virus mitigation plan.

Illinois Gov. JB Pritzker said certain regions could roll back COVID restrictions on Friday as long as they meet certain thresholds, but he said indoor dining won’t happen until each region moves back at least three more phases. Chicago is not on track to ease restrictions yet, CBS Chicago reported.