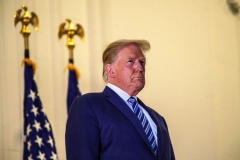 Conservative groups condemned Facebook Oversight Board’s decision Wednesday to continue to block former President Donald Trump’s Facebook page and Instagram account as “un-American” and an “obscene” abuse of power, pointing out that if it treated liberals like Sen. Bernie Sanders (I-Vt.) the same way, people would be outraged.

As CNSNews.com reported, the Oversight Board said “it was not appropriate for Facebook to impose the indeterminate and standardless penalty of indefinite suspension" of the former president’s account.

The board called on Facebook to review its decision “to determine and justify a proportionate response that is consistent with the rules that are applied to other users of its platform.” The review must take place “within six months of the date of this decision.”

The decision was panned by conservative groups:

Facebook and Twitter continue to censor U.S. political leaders while promoting dictators and terrorists. Platforms that began as the greatest-ever expansion of First Amendment freedoms have become the greatest threat to them. They are today’s segregated lunch counters and buses, and if they will not reform themselves, they must be reformed.

Facebook’s decision to silence the recipient of 74+ million votes for President shows their blatantly biased political agenda. Once promising free expression, this social media effort has devolved into partisanship of the worst order. Those who attempt to stay informed by Facebook are now subject only to propaganda.

This is censorship, plain and simple. Facebook executives are simply attacking President Trump for political reasons as they work to prevent him from communicating with his supporters. Their claim that President Trump’s rhetoric contains ‘a serious risk of violence’ is laughable.  If Facebook were really concerned about that, they would have taken down Maxine Waters’ page – not to mention the Facebook pages of all the other Democrats who cheered on the violent riots of 2020.  Facebook is silencing our 45th President for purely political reasons.  Every American should be appalled by this ongoing attack on free speech.

Today’s decision by Facebook’s Oversight Board is outrageous!  It's utterly inconceivable that a sitting or former president of the United States could be censored.  No president is above the law, but no president is beneath it either.

If Big Tech social media giants have the power to suspend the First Amendment rights of a sitting president, then no citizen is safe from censorship.  Sadly, that is precisely the Orwellian, Big Brother regime that the intolerant, totalitarian left is creating.

"Today, after multiple delays, Facebook's Oversight Board failed to stand up for free speech. Instead of reversing Facebook's horrible decision to ban a sitting president from their platform, the mostly global review board kicked the can down the road, effectively extending the ban for another six months. Another win for censorship and the suppression of dissenting voices, and a loss for free speech. Facebook also gets its first opportunity to interfere with the 2024 election."

Facebook's decision to ban then-President Donald Trump from communicating with the American people, and to continue to ban the former president after he left office, illustrates the political bias that threatens free speech in our republic. Federal and state policymakers must take steps to safeguard free speech on the Internet, just as our founding fathers safeguarded free speech in the town squares of their day.

"Americans cherish the principles of free speech, freedom of religion, and freedom of association. But elitist, liberal tech monopolies like Facebook are bent on silencing viewpoints that threaten their political and economic power.  That’s dangerous and threatens our most precious freedoms, including our elections.”

“Big Tech censorship continues.  The out of touch liberal elitists at Facebook don’t like President Trump because he speaks truth to their power on behalf of the forgotten men and women in America.  I’m confident that when we look back at these dark times and the un-American violations of First Amendment principles that are taking place, it will be viewed as an enormous in-kind contribution to a potential Trump comeback in 2024.”

The repeated statements of Facebook about their belief in free speech are a farce. While their platform is open to the most vile of radical ideologies and pornographic content, they ban a President of the United States because he dares to contest their misguided liberal ideas. All Americans should use this opportunity to delete the Facebook app from their phones.

LifeSiteNews.com laments and condemns the decision by Facebook to politically weaponize their platform by un-publishing President Donald J. Trump.

Last night, LifeSiteNews.com itself was summarily unpublished from Facebook.  Our crime was publishing a guest editorial listing official government instances of vaccination which resulted in immediate deaths.

Just minutes after being unpublished by Facebook, we were then summarily subject to a massive DDoS attack.  The age of information warfare is upon us, and the far left, which has taken over Big Tech and Corporate America, is the enemy of freedom.  These institutions now not only share the political ideology of communist China but more recently their economic interests as well.

America is in the gravest peril since the civil war.

The Catholic League is resolutely opposed to the abuse of power that is being exercised by social media giants. Denying freedom of speech to any publicly elected official, past or present, is obscene. Make no mistake about it, if Facebook and Instagram treated Sen. Bernie Sanders the way they are former president Donald Trump—by banning him—we would be just as outraged.

"In his 2019 Georgetown speech Mark Zuckerberg stated "I believe in giving people a voice because, at the end of the day, I believe in people". He assured us he believed in free speech and not censorship but here we are in 2021 and not only does FaceBook censor the common person but they have censored one of the most powerful, influential people in the world. Donald J. Trump, 45th President of the United States. He is permanently banned and essentially erased from the platform. This policy is abhorrent, unethical and un-American. Mark Zuckerberg needs to speak up and tell us does he still believe in giving people a voice? or only certain people?"

When private companies have been co-opted by government forces to act on behalf of the state or a particular regime then America has entered a dangerous period of fascism. The collusion between politicians and bureaucrats and private companies to censor speech is just as unconstitutional as the government acting alone.

“Facebook should avoid interpreting political free speech. Censorship is a dangerous slippery slope and exposes an unhealthy political bias against candidates some don’t like.  If someone advocates violence and breaking the law, that’s not hard to determine.  But the interpretive efforts that require subjective determinations is dangerous for a free society.”

“Facebook and other big tech platforms are presuming to tell the American people which public officials and candidates for public office are allowed to be heard on their platforms. This is a bid for one-party rule. If this were done on account of race or sex, it would be a clear violation of civil rights law, but because federal civil rights law does not protect partisan affiliation, there is almost no protection for opposition party candidates and officials. If Congress does not begin treating the two-party system on the internet as a civil right that requires protection the same as housing or employment discrimination must be defended against, we won’t have a two-party system for very long.”

Even if one wanted to pretend that the Oversight Board were independent and not subject to Mark Zuckerberg’s whims, it should concern conservatives that few if any of the members meet the definition of “conservative” in any meaningful way, and only five of its 20 members are American. Why would we concern ourselves with an international body's opinion about American values like free speech and free expression?

The Oversight Board’s decision to uphold the suspension is the wrong one, and one that all Americans, regardless of political affiliation, should be concerned about. However, it was entirely appropriate to admonish Facebook's vague and standardless penalty.

Big Tech companies should not be allowed to play by a set of rules that give them undue influence over American society while also avoiding any accountability for how they use that influence. It is time for Congress to act and reform Section 230 in a way that respects the rights of those engaged in private enterprise but also ensures companies like Facebook and Instagram take responsibility for the choices they make—especially when it comes to censoring individuals and opinions they don’t like.   Letting politically motivated companies police themselves as they manipulate civic discourse is not a long-term solution consistent with America’s values.

Whether it’s the president of the United States or an average American citizen in Des Moines, Big Tech should not have the ability to suppress viewpoints it finds objectionable—and it certainly shouldn’t have the ability to hide behind outdated laws in justifying such behavior. Censorship is a threat to our American republic, and woke corporations like Google, Twitter, and Facebook should not be allowed to engage in such behavior without consequence.

Today’s decision concerns one individual, but we all know that if Big Tech continues to feel emboldened to silence a sitting president, they can and will silence the rest of us.

While the Oversight Board has spent the past few months deliberating whether Facebook and Instagram should grant a democratically elected president access to their platforms, these companies have allowed dictatorial, adversarial regimes in China, Russia, Iran, and North Korea to pump out propaganda on those same platforms. Big Tech companies have put their hypocrisy on full display and, as a result, have lost the public’s trust.

There are ways for these companies to remove truly objectionable, obscene, and inciting content from their platforms, and there are ways Congress can and should change the law to allow them to do so. However, as these woke corporations continue to swing the sword of censorship, we will fight back.   Big Tech faces a choice: work to reform Section 230 and treat users with consistency and transparency now, or face more dire policy consequences in the future.

Facebook’s decision to silence the recipient of 74+ million votes for President shows their blatantly biased political agenda. Once promising free expression, this social media effort has devolved into partisanship of the worst order. Those who attempt to stay informed by Facebook are now subject only to propaganda.

Free speech in America suffered another blow. Facebook's Oversight Board was always a fraud, a feckless group not dedicated to protecting free speech online, but in maintaining the censorship power of the Big Tech oligarchs. Let's also be clear that by the Oversight Board's own weak justification for maintaining the ban on a sitting and now-former president, it is defining itself as a publisher and not a platform. That being the case, Section 230 protections should not apply to Facebook and its business plan should be null and void.

"Today, Facebook's Oversight Board made the wrong decision to uphold the ban of President Donald J Trump from Facebook. This is yet another attack on our fundamental rights to freedom of expression and should not be celebrated. While they admitted Facebook acted outside of their existing policies, the Oversight Board is only willing to require Facebook to make a final ruling within the next 6 months. This is a chilling decision that should disappoint all freedom loving Americans."