Dr. Martin Luther King Jr.’s Niece: It Has Nothing to Do with Skin Color 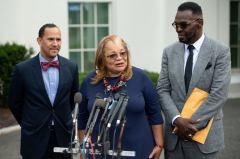 Alveda King (C), niece of Dr. Martin Luther King Jr., speaks following a meeting with US President Donald Trump and other faith-based inner-city leaders at the White House in Washington, DC on July 29, 2019. (Photo by SAUL LOEB/AFP via Getty Images)

Dr. Martin Luther King Jr.’s niece, Dr. Alveda King, said Friday that the protests in honor of George Floyd, who was killed by police last month during an arrest in Minnesota, have “nothing really to do with skin color” as evidenced, she said, by the arrests of African-American police officers in Atlanta who were charged with using excessive force against two college students.

“We know that it has nothing really to do with skin color, because we had African-American policemen to attack African-American college students in Atlanta with giving, tasing them and roughing them up and breaking the young man’s hand because they were out on the street after curfew returning to their homes, and they were not violently protesting. So, this has to stop,” she told Fox News’ “America’s Newsroom.”

The officers – five black and one white – all face excessive force charges after video of the interaction with two students - Messiah Young and Taniyah Pilgrim – went viral. The video and body camera footage showed the officers dragging the students out of the car and arresting them.

Two of them - Mark Gardner and Ivory Streeter were fired. The other four officers were placed on desk duty.

King said she’s reminded of the violence that affected her own family years ago.

“I'm reminded of my father, Reverend Alfred Daniel Williams King standing on a car in 1963 after our home in Birmingham, Alabama, had been burned and fire bombed. Dad stood on the car, and he says, ‘If you must hit someone, hit me, but I would rather you go home and pray. My family and I are fine,’” she said.
King said that protests must be “prayerful” and non-violent, something her uncle advocated.

“Protest is necessary. It's required at this time. It must be prayerful. It must be peaceful. Leaders have to be calming the masses, not saying don't protest. I'm protesting. What has happened has been wrong, not just to George Floyd, certainly to George. There are others who have experienced that same fate,” she said.

“But we have to pray, and leadership, leaders, whether you are just a leader of your own household, whether you are on your job, a minister, an elected official, whoever you are, a CEO of a corporation, let's assure each other. Let's calm each other. Violence is immoral. Martin Luther King, Jr., did say that, and by me as a Christian knowing Christ, I know we have to be prayerful not fearful and not violent,” King said.

“Three of my family members were killed because of injustice. Martin Luther King, Jr., was shot at 68. My dad was choked and thrown in a swimming pool, and there was no water in his lungs in 69. My grandmother was shot in 1974 while playing the organ at Ebenezer Baptist Church,” she said.

“I see skin color, but I don't refuse to love people,” King said.