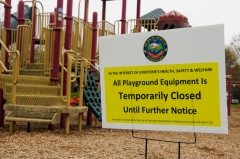 An Idaho woman was arrested in front of her kids on Tuesday for letting them play on the playground in violation of social distancing orders.

The Meridian Police Department responded to “several calls”  and arrested and charged Sara Brady with one count of misdemeanor trespassing.

Video of her arrest shows other parents and children were at the playground as well.

“Upon arrival, officers saw that metal signage and caution tape announcing the playground closure due to COVID-19, was removed. Additionally, officers observed numerous individuals gathered on the closed playground area. Officers informed those gathered several times that the play structure was closed, and that they were welcome to utilize other areas of the park if they chose,” the Meridian Police Department said in a statement.

Police say that Brady was arrested “after being told to leave the playground multiple times” because she “refused to leave.”

“Meridian officers made several attempts to help BRADY adhere to the rules. She was non-compliant and forced officers to place her under arrest to resolve the issue. She was arrested for trespassing,”  the police department said.

“These are very trying times and the Meridian Police Department supports the public’s right to assemble for peaceful protest, however the right does not include damaging public property or ignoring closures of City property and facilities,” it said.