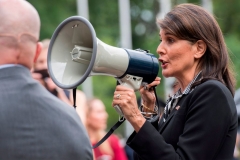 Former UN Ambassador Nikki Haley questioned Rep. Alexandria Ocasio-Cortez’s plan to pay for a Green New Deal and Medicare for All, asking where the money will come from when she wants to pay people to stay home and not work and she wants student loan forgiveness.

Joined by members of the so-called squad – Reps. Ilhan Omar (D-Minn.) and Rashida Tlaib (R-Mich.) – and other leftists at a press conference outside the Democratic National Committee on Thursday, Ocasio-Cortez said, “We’re winning. It's working. It's happening. And we are going to secure our future. We're going to secure the basic tenets of a Green New Deal, a multi-trillion jobs program for climate, for environmental, racial, gender and class justice.”

That same day, Ocasio-Cortez tweeted, “To get the virus under control, we need to pay people to stay home.”

“Republicans are mad at this when they literally just voted to do just this in March. The reason they’re opposed to it now is because last time they got a Wall Street bailout and this time all that’s left is helping working people, the disabled, the poor, etc.,” she tweeted.

Haley asked where the money will come from to pay for a Green New Deal if she wants people to get paid to stay home.

“AOC, Are you suggesting you want to pay people to stay home from the money you take by defunding the police? Or was that for the student debts you wanted to pay off, the Green New Deal or Medicare for All? #WhereIsTheMoney,” Haley tweeted on Thursday.

Haley said it’s just “another reason” for Republicans to win the Senate runoffs in Georgia in January so the Senate remains in Republican control and can “stop bad things from happening.”

“Another reason we need to win the Ga races, to stop bad things from happening. AOC and her liberal squad are pressuring Biden to pass their $93 trillion Green New Deal, which would cost up to $600,000 per household estimated by the American Action Forum,” she tweeted on Friday.