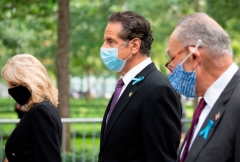 Jill Biden (L) walks with US Senator Chuck Schumer (2nd R) and New York Governor Andrew Cuomo (C) as they depart the National September 11th Memorial in New York on September 11, 2020, after attending a ceremony to mark the 19th anniversary of the attacks. (Photo by JIM WATSON/AFP via Getty Images)

Several New York sheriffs say they refuse to enforce New York Gov. Andrew Cuomo’s cap on the number of people who can gather for Thanksgiving.

A sheriff in Erie County announced Friday that he has no plans to enforce the rule saying the “longstanding family traditions” are at the heart of a America and shouldn’t be interrupted by Cuomo’s “mandates.”

“I have no plans to utilize my office’s resources or deputies to break up the great tradition of Thanksgiving dinner,” Erie County Sheriff Tim Howard said in a press release.

“This national holiday has created longstanding family traditions that are at the heart of America, and these traditions should not be stopped or interrupted by Governor (Andrew) Cuomo’s mandates.”

“I think it’s shocking for a law enforcement officer — an elected official — to say that,” Gottfried said.

The governor announced last week that no more than 10 people can attend a party or other gatherings in private residences, including apartments and houses.

Now, three more sheriffs are voicing their opposition to the rule, saying they won’t enforce it on Thanksgiving.

Fulton County Sheriff Richard Giardino wrote in a Facebook post on Saturday, “Frankly, I am not sure it could sustain a Constitutional challenge in Court for several reasons including your house is your castle,

“And as a Sheriff with a law degree I couldn’t in good faith attempt to defend it Court, so I won’t,” Giardino wrote.

“We have limited resources and we have to set priorities, so obtaining a Search Warrant to enter your home to see how many Turkey or Tofu eaters are present is not a priority,” he added.

Washington County Sheriff Jeff Murphy said he will not enforce the rule on Thanksgiving.

“I can’t see how devoting our resources to counting cars in citizens’ driveways or investigating how much turkey and dressing they’ve purchased is for the public good,” Zurlo said in a press release.

Cuomo’s senior adviser Richard Azzopardi responded to the sheriffs’ announcements by blaming the spread of the coronavirus on politicians who ignore the advice of medical experts.

“Politicians acting like politicians and ignoring what the actual experts say has been fueling the spread of this virus [and] is what plunged this country in this continued public health crisis in the first place,” Azzopardi said.

“We urge everyone to continue to be smart and act responsibly. We know this makes people unhappy, but better unhappy than sick or worse,” he said.