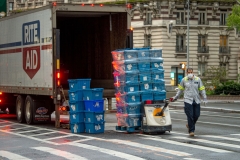 NEW YORK, NEW YORK - APRIL 24: A truck driver wearing a mask and gloves wheels a palate of items into a Rite Aid location amid the coronavirus pandemic on April 24, 2020 in New York City, United States. COVID-19 has spread to most countries around the world, claiming over 196,000 lives with over 2.8 million cases. (Photo by Alexi Rosenfeld/Getty Images)

Seventy-seven percent of truck drivers say they would not deliver to cities that have defunded police departments, according to poll by CDL Life.

The CDL Life App asked truck drivers: “Would you pick up/deliver to cities with defunded or disbanded police departments? Why or why not?”

Truck driving is considered to be one of the most dangerous jobs in the country, according to the U.S. Bureau of Labor Statistic.
Apparently Minneapolis would be one of the cities that truck drivers would avoid.

The Minneapolis City Council on Friday voted unanimously to replace the police department with a community-led public safety system.

Other cities like New York City and Los Angeles have said they would reduce the budgets of their police departments.

A poll respondent expressed concern that if something were to happen, they would have to take matters into their own hands and risk being prosecuted for protecting themselves.

Another respondent said they have informed their dispatcher that they would refuse all loads to cities with defunded police departments.