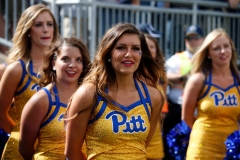 Members of the Pitt dance team are seen in action against the Penn State Nittany Lions at Beaver Stadium on September 9, 2017 in State College, Pennsylvania. (Photo by Justin K. Aller/Getty Images)

The University of Pittsburgh says that words like freshman, upperclassmen, ladies and gentlemen, ombudsman, and mankind are “sexist language” to be avoided when writing and speaking.

On a page called “Gender-Inclusive / Non-Sexist Language Guidelines and Resources,” on the school’s website, it says, “misgendering someone is disrespectful and dismissive.” It asks: “Have you ever been called by a name or gender that you don’t identify with?”

“One way to misgender is to assume you know someone’s gender via their appearance and to call them a name or pronoun that they don’t identify with. Misgendering can also occur when you teach as if your entire class is male. The best practice is to use words daily with intention and care,” the website states.

“To avoid unintentionally creating a sexist and homophobic classroom environment, during discussions do not limit yourself to male examples or heterosexual examples. Teachers can and should honor the breadth of experience and potential in students’ lives by discussing women, gender non-conforming, and LGBT- identified people. For example, avoid giving examples that assume that all doctors are men,” it states.

The school suggests that instead of saying, “freshman,” students and teachers use the word “first year student” and instead of “lowerclassmen/upperclassmen,” they should say, “lower division/upper division undergraduate.*

Instead of “ladies and gentlemen,” they should use the words: “colleagues, guests, all, yinz, friends, people, students, folks.”

“Rather than beginning class by calling roll and potentially addressing a student by a name or pronoun that they do not use, here are some strategies for being inclusive on the first day: 1) Ask students to introduce themselves or 2) Ask students to write down names and pronouns,” the school advises on its website.

It explains how to use names and pronouns and offers “strategies.” It also warns that “a person’s gender identity may change over time” and advises teachers to “be open to changes in gender pronouns.”

“Here are a few strategies to keep in mind when meeting regularly with a group of people for a class or event: If you are not sure what name or pronoun someone uses, ask! Respect a person’s identity by calling them by the name and pronouns that they use. Keep in mind that a person’s gender identity may change over time. Be open to changes in gender pronouns,” the website states.

The page also advises how to use “Gender-Inclusive Pronouns for Third Person Singular.”